Potato Gratin - How do I love thee? Let me count the ways.

I've said before and I'll say it again - I'd love for some sort of potato gratin to be part of my last meal on earth. Barring that, I love to eat it on holidays, with friends, just for Sunday dinner. Potato gratin used to seem a somewhat daunting dish to me, so much to peel, chop and assemble. I suppose I've just done it enough now that I'm used to the process and find it all quite simple.

I've featured a few different potato gratins here on Books and Cooks. First, there was the Yukon Gold Gruyere Galette. Not only is it divine tasting, but Karen mentioned it and suddenly - I had readers. That galette changed my life.

I thought I had posted a photo of my herbed summer squash and potato torte - a summertime favorite for sure. Here is a post by another fan of this torte.

Here is a more simple gratin in process. 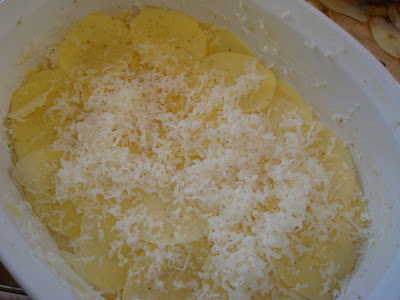 Here is the link to the recipe for this one. I actually don't even remember making this to tell you the truth! Good thing I have a blog. I actually made this again just recently for company and used milk for the liquid. It separated in the oven again, but due to necessity, I removed it from the oven and then reheated it - it turned out beautifully.

This brings us to my most recent gratin, Potato-Onion Gratin from Bon Appetit and for which I can find no recipe online. This was another keeper. 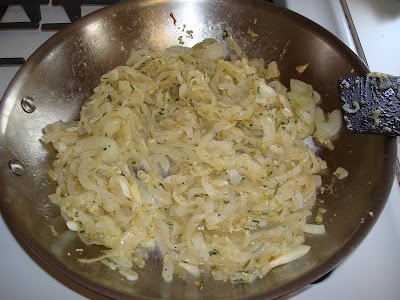 Onions are sauteed in olive oil, to which garlic, thyme, rosemary, salt, and pepper are added. They are divided in three parts and layered between peeled and sliced potatoes which are salted and peppered along the way. Chicken broth is poured over the entire thing which is then baked in the oven covered at first then uncovered until finally you end up with this. 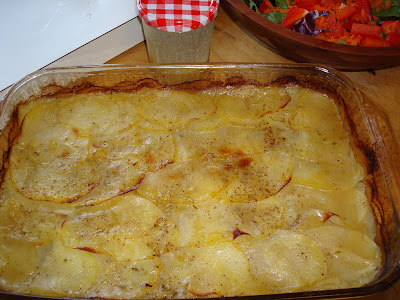 So divine. I think I either added too much broth or cooked it too long since they seemed a bit too soft. But. Still very, very good, dairy free, and could be vegan if you used veggie broth.

Ah, the potato gratin. Infinite possibilities.
Posted by Tara at 9:48 AM

Well, I never knew I had influence, but that said, I'm so glad it's positive!
Much more importantly, potato gratin in al its variations is just sublime.

Somebody pass me a spoon!!

If I made a list of all the ways I love Potato Gratin, we would be here forever! Yum!

I hate to say it, but I love potatoes. This looks yummy. Do you think someone who's not a terribly great cook (me) could pull this one off?

I'm ashamed to say I've never had Potato Gratin...but reading this (and linked) posts I think I must try it sometime! Looks lovely!

bermudaonion, it's so good!

Cornflower, well, you definitely did- have influence, that is!

J.Danger, I know what you mean!

Danielle, I love them, too. It's not hard, for sure, but it helps to have a food processor to slice the potatoes.

Claire, you must try it sometime! Yum!

I am speaking, but you probably can't hear it because my stomach is growling louder than that. Yum.

Bybee, hehe! It was good!