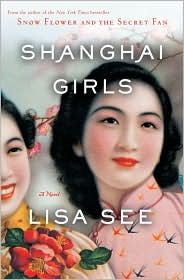 I was a huge fan of Lisa See's novel Snow Flower and the Secret Fan, so you can imagine how thrilled I was to get an advance copy of her latest release, Shanghai Girls!

Pearl and May are sisters living what they considered to be a fabulous life in Shanghai in the 1930s. Beautiful and without worries, they partied, slept late, and generally enjoyed life. A financial situation their father is embroiled in changes everything. The sisters are married off to men living in Los Angeles but before reaching America find themselves on the run from the Japanese who have invaded Shanghai. Their lives in America are not what they were led to believe, and the sisters bring to their new home a secret that must not be revealed. Time passes, the sisters adjust to their new life, but as always seems to happen, fate intervenes again and changes everything.

If you're looking for an uplifting book - this isn't it! That's not to say I didn't enjoy it since I tend to like depressing books, but really, there is not much good that happens to these sisters. And even when things aren't going terribly bad, there is still a sense of melancholy that surrounds these women. It was interesting to learn about the point of view of Chinese immigrants and the particular challenges they faced coming to America. I tend to read more of the Jewish/European immigrant story so this was educational for me.

I couldn't help but compare Shanghai Girls to Snow Flower and the Secret Fan. In that respect, Shanghai Girls just didn't resonate with me in the same way the previous book did but I still found it to be a satisfying read. The ending of this book is rather unexpected and open ended. Things were really left hanging; on the plus side we may have another book about these characters, on the other hand, I think some readers will be put off by such a cliffhanger of an ending.

In other news, the girl has her first piano recital this evening. How cute is that! She will be playing piece called Pillow Fight which her teacher thought suited her personality - and she is right!
Posted by Tara at 10:35 AM

I like Shanghai Girls, but nothing can compare to Snowflower and the Secret Fan --exceptional!

I loved Snow Flower and the Secret Fan, and I do plan to read this one at some point, too.
Enjoy the recital - they are so much fun! Twin B is our piano player. She's been at it for 10 years now.

Great review. I enjoyed Snow Flow and the Secret Fan. Have you ever read Amy Tan? I recommend The Hundred Secret Senses and (of course) The Joy Luck Club.

I have Shanghai Girls waiting in the pile, so I'm interested to read your thoughts, Tara.
Very best wishes for the young pianist's debut!!

I just saw this in my MIL's People mag. Looks good!

Hope the recital goes splendidly and I just picked up Shanghai Girls the other day..great review and I'm eagerly looking forward to reading it!

This isn't the first review that I've read that says this book doesn't measure up to Snow Flower. I want to read both books!

I'm still not done reading this one. It isn't doing it for me and that is why it's taking me so long to finish. I keep putting it down and I'm a bit disappointed because it's my FIRST See book.

I'm still to read Snow Flower - I have only heard great things about it from everyone so it is definitely on my list.

I am looking forward to reading this one, but I am not sure anything can live up to Snow Flower and the Secret Fan. Perhaps it's good my expectations aren't quite so high with this one. :-) I enjoyed reading your review, Tara.

I still haven't read Snow Flower, but hope to get to it this summer. I've heard nothing but great things about it. Think I'll skip this one, however.

Vintage Reading, I have never read Amy Tan! She is one of those authors I mean to read but never do. Thank you for the recommendations.

Cornflower, she did very well, thank you! I look forward to your own thoughts on this book.

J.Danger, it's a good read!

Staci, it absolutely did, thanks. I hope you enjoy the book!

Bermudaonion, yes! Do read them, I think you will like them.

Ti, Nuts! But I can see your point. The girls were a little bit whiney for me. I'll be looking for your review when you've finished.

Literary Feline, I think this will be a problem Lisa See will face for a very long time! I don't know if she could ever exceed Snow Flower.

I liked this book a lot, it's hard to follow Snow Flower but I think it was a wonderful story. I am having a giveaway if anyone is interested in a chance to win an ARC copy, ends June 12th.

Lucky you! I haven't read any of See's work yet, but I have Snow Flower on my stacks waiting to be loved.

Bonnie, I agree. Thanks for mentioning the giveaway!

Andi, I hope you love it! It's a wonderful book.