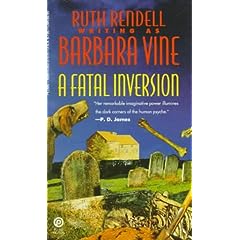 A Fatal Inversion is, I believe, the fifth book of Barbara Vine's that I have read. In this story, there is the classic Vine set-up - we know that two people have been killed but not who they are, we know the group of people from which the killer comes, basically we know the 'what' but not the 'who' or 'why'.

Around 10 years before the story takes place five young people come together one hot summer to live in an old estate, Wyvis Hall. Their behavior is rather bohemian, as they drink away the summer, sleep late, and sell items from the house to pay for alcohol and food. Something happens though, that causes them to all go back to their lives, school and work, and make a decision to never speak to each other again. 10 years later two skeletons are found. The story is told from the perspective of three of the original five people. All are terrified of this story being traced back to them and deal with this in different ways. We slowly come to learn what happened that summer and how everything went so wrong.

I liked this book, but not as much as the others by Vine that I've read. I can't really put my finger on why. The only thing I've come up with is that in this book, every chapter, every thought is about that one incident, and in Vine's other books, there is much more of a sense of everyday life that is suddenly affected by a fatal act. The reviews I've found of this are quite good so it may just be me that feels this way. Despite my issues with the story, I found the last chapter to be absolutely brilliant and capped the book off perfectly. I think this book would be generally enjoyed by Vine fans, but is not perhaps the best place to start reading her work. For that I would suggest Asta's/Anna's Book, A Dark Adapted Eye, or The House of Stairs.

I hadn't planned on writing about this book today, but it turns out to be perfect for Halloween. Boo!
Posted by Tara at 10:37 AM

I bought this one secondhand recently to read fairly soon. I note though that you recommend not to start reading BV with this book, which is what I would be doing. I'll see if I can find one or two of the other titles you recommend in the library and try those first.

I really liked this, but I agree it is probably not the best book of hers to start with. Asta's Book (or Anna's Book) is one of my favorites and a great one to read and end up being hooked on her work!! I tried reading this years ago and couldn't get into it, but this year was the right book at the right time for me. I thought she did a superlative job of creating the right atmosphere--all very pscyhological--like dissecting a crime, but there wasn't necessarily a lot of story outside of the group of people at Wyvis hall!

I love crime writing as long as it is not too graphic. This sounds it would be right up my alley. I shall have to chase up your recommendations.

Hi Cath, it looks like Danielle agrees - Asta's/Anna's Book is probably my favorite. I bet you'd like it.

Danielle, I'm glad you agree! Your last sentence about there being no outside story - that's what I was trying to say.

I haven't read Barbara Vine in eons, this sounds suitably creepy, if not her best.

Maybe not the best to start with but don't start & end with it! She's great.

I've never read a Vine book, but Asta's Book is on my list, thanks to your review (has been, for a while).

Carrie K, it's definitely creeper, she is such a master at creating that atmosphere.

Bookfook, Asta's Book is GREAT! I hope you read it someday. And like it!