Sister Carrie (Among other things)

Brrrrrr! It is cold here! My bedroom was 60 degrees this morning. I remember a few years back, perhaps the fall/winter of 2000 when I wore my winter coat from the end of September into June - I hope this year is not a repeat of that.

My daughter and I went to the farmer's market this morning. The overnight temperatures have gotten very close - but we haven't had our first frost yet, thus late summer vegetables are still available. Here are small bits of what we brought home. 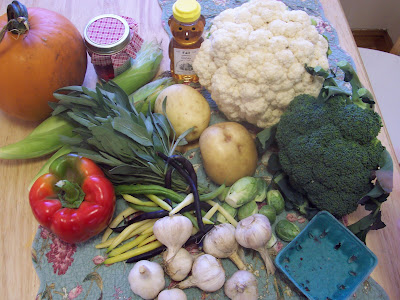 I was so happy to see garlic today - the farmer who grows it has been out the last 2 times I've asked him. What was in that empty container? Late-season raspberries picked out by my daughter and eaten on the way home. I got four. She also picked out the Fall variety of honey (I preferred the Late Summer) and Red Currant Jelly (I tried to talk her into the Peach-Ginger Chutney) and a pumpkin so she can eat the seeds. I actually ran out of money since three of these items were quite costly. It's definitely more interesting to be there with her - and watch her interact with the vendors who are so wonderful to children. My cooking plans include Cauliflower-Cheese Pie (a request from my co-shopper), corn pudding, and a pasta dish I'll make with the roasted pumpkin.

I finished Sister Carrie by Theodore Dreiser yesterday. This was the second time I've read this book, the first being some years ago while I was living in Chicago. Sister Carrie tells the story of Carrie Meeber, an 18 year old arriving in Chicago in 1889 from a small town to live with her sister and sister's husband and find work. Carrie is immediately swept up in the excitement and romance of the big city, but soon finds that her life is not going to live up to her expectations. The only work she is able to find is mind and body numbing factory work. Carrie loses her job due to illness and not finding another quickly, thinks she will have to go back to her small town. Enter Mr. Drouet, who takes Carrie under his wing and she agrees to move in with him. Drouet introduces Carrie to a business acquaintance George Hurstwood who falls in love with Carrie, and makes some very poor decisions which lead him to tragedy. I remembered enjoying Sister Carrie the first time I read it, and was having trouble remembering why this time around. I know that I enjoyed the Chicago setting and being able to imagine where the action was taking place. Dreiser included quite a bit of moral discussion in the early part of the book, the amount of which decreases later on in the story when the plot takes over. I would say that I did enjoy this again and suspect that the fact that I read the first half of the book in short snippets late at night when I was tired decreased my interest in it. I found all the characters to be fairly unlikeable. Hurstwood is a weak and disgraced man. Carrie is the 'fallen woman', living with men she is not married to; I didn't really blame her as the alternative was not so desirable. Drouet seems like a nice enough fellow, but what sort of man expects a woman in live with him in 1889, unmarried (it comes up a few time why he has not married her).

I found the appendix in my copy to be of particular interest. It has to do with the multiple versions of Sister Carrie, particularly differences between the manuscript and the published text due to revisions. I found it quite interesting that Dreiser's wife made some of the revisions including the very last words of the novel which actually change the meaning of Dreiser's original words.

I don't think I'll ever read this novel again, but am glad I had the chance to revisit it.
Posted by Tara at 2:09 PM

Labels: 2007 Books, In the kitchen, local eating, my girl

Dreiser isn't a very cheerful author, is he? Once around was enough for me.

Jill, I should have mentioned I was re-reading the book to discuss with my bookclub. Otherwise I'm sure I would not have revisited it.

Oh my goodness, all those vegetables look so wonderful! Makes me want to head for the nearest Farmer's Market this instant!

Your menu sounds wonderful! I make a cauliflower and cheese bake but never done a pie, sounds really good, do you make the crust from potatoes?

Anjali, I also love to make cauliflower cheese gratin(actually I think I like that better but my daughter requested this). Yes, the crust is from potatoes, shredded, with part of a shredded onion and an egg. You par-bake that before adding a cheese layer, the precooked cauliflower, more cheese then an egg/milk mixture. It turned out well and the leftovers are great for lunch.

Your picture is a beautiful still life. Loved the farmer's market story. I can happily live out my life never reading Dreiser again. :<)

Thank you, Nan - I'm feeling the same about Dreiser at this point.

I bought Sister Carrie a few years ago at a library sale, but never read it... not sure whether this review has made it more or less likely! I don't mind cheerless authors, so long as they are still good writers... sometimes depression is used in lieu of talent...

Hi Simon - I went to bookclub this past Thursday evening and was surprised to find that everyone who finished the book enjoyed it very much. I didn't expect them to. A very different reaction than the ones expressed here. If you already own it - I'd say try it!