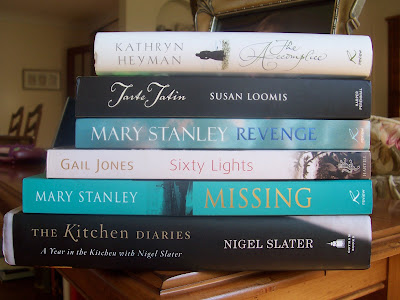 Thanks again to bookgirl for leading me to my favorite recent discovery, bookcloseouts.com. I was able to find a few books there I've been wanting for some time which for the most part were unavailable in the US. Here's what I received:

The Kitchen Diaries by Nigel Slater - I love, love, love this book. I borrowed it from the library last December based on a recommendation from Bon Appetit magazine ( yes, I'm a magazine addict as well) and I thought I would just skim over it and take it back. I started reading it and wound up reading it cover to cover, mostly at my in laws house when I was there for Christmas. It reads like the best novel, and I just want to move in with Mr Slater and eat everything he's serving. Well, I knew then that I had to OWN this, but was waiting to find a deal on it, which I finally did.

Tarte Tatin by Susan Loomis - I read her book On Rue Tatin some years ago and really enjoyed it. I browse Amazon UK quite a bit and became aware that she had written a sequel, which for some unknown reason was never published here in the US so was thrilled to find this.

Missing and Revenge by Mary Stanley - I came across her book Retreat some years ago in a used book store and again, enjoyed it quite a bit. She has not been published in the US, so, although I knew she'd written other things since then, there was not an easy way to add them to my library. I was thrilled to find these.

Sixty Lights by Gail Jones - I've read a couple reviews of this out in blogland, and a particularly good one over at Reading Matters. I've had my eye out for this ever since.

The Accomplice by Kathryn Heyman - I don't know much about this except it kept coming up as similar to the others and looks interesting. It is about a shipwreck off the coast of Australia and the survivors.

The company's headquarters are in Canada, and they cross the border to ship to US addresses via Media Mail which makes for fairly inexpensive shipping. Their stock must be coming to them from all over, as 3 of the books I received are Australian editions. Most of their novels are between $3.99 and $5.99 so the prices are a steal as far as I'm concerned. I highly recommend them!
Posted by Tara at 10:29 AM

Tara I'm so glad you are enjoying Bookcloseouts. I have been ordering from them for a while now and have always been super happy with their service. I didn't realize their headquarters were in Canada, no wonder so many of the editions aren't U.S. ones. Enjoy your new books!

Great haul, Tara! I've read both Susan Loomis books and enjoyed them, and I gave the Nigel Slater to my brother for Christmas and wished I could keep it for myself, it looked so good.

Bookgirl - Thanks again for the tip! I'm sure I will order from them again in the future.

Lesley - I know, I feel the same way everytime another blogger mentions a new book/site/magazine/you name it, that I just HAVE to have.

Karen, Glad to hear you liked the Susan Loomis books, I wondered if the second wasn't well receieved since it wasn't published here. What a wonderful gift for your brother, I don't think I would have been able to let it go, or at least would have purchased 2 copies.