There is a stack of books on my nightstand, okay actually there are a few stacks, but the one I'm talking about is the stack of 6 books I've started, some as long ago as the beginning of 2010. Everything just seems 'blah' to me right now. No book is clever enough, engaging enough, well written enough to suit me it seems. Dare I say it? I'm bored by many of them. Every few days I get so annoyed that I start another book which is how I came to have so many in the stack. Another thing I keep doing is picking up something I know will be quick and pleasing, read it quickly in about the span of a day and then I'm back to where I started. I think I am going to finish 3 of the books in the stack for sure. Not sure when. The other three I could walk away from and never look back. Isn't that sad? I'm not sure what I need. In any case here are a couple of books that have worked for me lately. 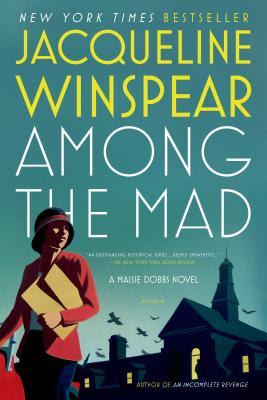 , a couple weeks ago. It was such a divine feeling to read the first page and sigh with relief knowing where I was headed. I think I said it with the fifth book but I am going to say it again; Winspear gets better and better and these last two installments are my favorites next to the first book in the series. The main storyline in this outing deals with the sufferings of those who served in WW1 and Maisie works closely with Scotland Yard to solve the case. The other main storyline deals with Billy's wife and her depression **spoiler!** over the death of her child in the last book **end spoiler**. The entire book is really a fascinating look at mental illness and how it was dealt with in the past. I look forward to the next book!

Harry Bernstein's memoirs are remarkable not just for their remembrances of a Jewish English boy, who grew up in poverty with an alcoholic father, then immigrated to the US. What is most remarkable about Mr. Bernstein is that he became a published author in his 90s and went on to write two more books. Having enjoyed both of Mr Bernstein's previous books, The Dream and THE INVISIBLE WALL

, I knew I wanted to read his third book which chronicled the story of his marriage. The Golden Willow: The Story of a Lifetime of Love

is the story of Harry and his true love and wife Rose. They had the sort of marriage most people only dream of. The Golden Willow goes back and forth between Rose and Harry's early days together, and their last days together as Rose died from cancer. It is a touching book and it's most poignant moments came when the author wrote about the grieving process, and how old age has affected his body and mind. The Golden Willow doesn't have the same narrative power as Mr Bernstein's previous books. There are times when it is repetitive and one wonders if life was truly always so cheerful. I think if you are a fan of the author's work already, you won't care about this, and instead will enjoy this book for what it is - a love letter to Rose.
Posted by Tara at 12:41 PM

I've heard the Maisie Dobbs books are wonderful so I'm not surprised that one worked for you. You'll get out of your slump.

I keep meaning to read these Maisie Dobbs books, but every time I remember that they exist, I find the first one in the series is checked out of the library. How would it be to start with the second? Would that ruin things for me?

I bought book one of Maisie last year. My goal is to read it this year!! LOL...I totally understand about reading a fast quick book and then going back to the stack to see if anything has changed from the last time you looked at them!! Good Luck!

I've got quite a stack on my night stand but mostly because I'm greedy (two are leftovers from late in 2009!). I'm so glad you liked the Maisie Dobbs book. I have just tonight finished the most recent (I begged the publisher for an ARE) and Loved it. If you liked this one and think they are getting better with each new book I think you'll really like her next book, too. I'm going to have to go back and reread the books again--now I have nothing to look forward to until next year when the author comes out with the next book. I hope you find a good book to settle down with!

Tara, you made me laugh. I would say forget about all the ones on your night stand. It's OK to just never go back to any of them. Life is too short.

Glad you are enjoying the Maisie Dobbs books. I've read #1 and keep meaning to continue them. I will at some point.

I got the first Maisie Dobbs last year and now you and Danielle have reminded me to go and get it out ... NOW!

As for not finishing books - it makes me grumpy too knowing that I have paid good money for them but you just gotta move on and not look back I say :-)

I felt the same way last week. Then all of a sudden I got my motivation to read back after reading Life As We Knew It, but then I crashed again. Everything I am reading right now is just ho hum and I am reading like 6 books right now.

I have this problem of being bored with everything occasionally. Surprisingly, now is not one of those occasions for which I'm thankful. I hope things pick up soon!

Kathy, is a really a very good series. I am reading better books now, thankfully!

Jennsybooks, sorry, but you really do need to begin with the first book! First off, it is probably the best one, and through it we get to know Maisie and her backstory which is necessary.

Staci, read it! It's very quick.

Danielle, oh, I can't wait for the next one now! Too bad JW cannot write faster! I just hope she continues with the series.

Kay, I have said goodbye to 2 and perhaps a third. Thanks for the good advice. The MD books are such a treat.

Samantha, read it! It's very quick. That's how I am feeling with a few of these that I paid for - very grumpy!

Ti, ugh, you were in the same boat as me. I am reading a couple more engaging things now and feel much better.

Andi, isn't it awful! Glad you're in a good reading place! And my reading has improved so all is well.

I had jury duty today and only took one book along with me to read while sitting in the jurors' lounge before getting assigned to a case. What a mistake!! I should've taken at least two. It was the one time I wished I had a Kindle! I read 30+ pages and was bored to death. Luckily, I live close enough to the downtown area that I could go home on our 2 hour lunch break and get a new book! Phew! Nothing worse than being stuck somewhere with nothing but a dud to read.

I'm so glad to know that the Maisie Dobbs' books improve with each additional title. I've only read the first and wasn't terribly impressed. Somewhere along the way, I acquired the next two, so I feel an obligation to give them a try. Now to decided whether I should go back and re-read the first to refresh my memory... maybe I'll listen to it on audio.

I don't know Maisie Dobbs, but you've got me intrigued - I'll look her up immediately!

Les, oh no! It sounds like a reading nightmare. One member of my bookclub brought a really awful book with her camping and there was no going back. She was so disappointed. I've heard a few people say they're just not into Maisie Dobbs, I'm kind of guessing if you're not crazy about the first one (my favorite) you won't fall in love with the later ones. I think the last 2 have been the best ones since the first.

I wound up getting Maisie Dobbs on audio from the library and am listening instead of re-reading. So far, so good. I like the reader!