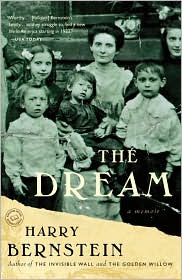 I'd picked this book up a few times at the store, but never took it home with me, until I read Lisa's fabulous review of Bernstein's other memoir, The Invisible Wall

. I am not usually so stupid about books, but for some reason I got it into my head that The Invisible Wall was the follow-up to The Dream, so I ordered The Dream, only later discovering that it is Bernstein's second book, after The Invisible Wall. Silly me. But. I can tell you that whether or not you've read Bernstein's first book, The Dream stands alone as a fabulous memoir.

What is rather remarkable about Bernstein's books is that they exist at all. You see, he is now 98 years old and didn't begin writing until he was in his 90s. The Dream begins when Harry and his family set out for America from a small mill town in Britain. This has been his mother's dream for many years as she hopes for a better life for her children. Harry grew up in poverty with a sacrificing mother, and a father who drank away his wages and provided little to his children.

The Bersteins go to Chicago where they have family and have a few successful years. The great depression begins, and life changes again when part of the family moves to New York. Harry writes about his days as a schoolboy and later as a young working man. The move to New York winds up being fortuitous for Harry, as he meets and falls in love with Ruby, the love of his life, and is finally able to spend time writing. The pictures included in the book compliment the story perfectly and the love between Harry and Ruby is apparent in photos of them as young newlyweds and as an older couple.

Harry Bernstein is a gifted writer, he tells his story simply but with emotion and love. This was one of those books that I couldn't put down. I'm now reading Bernstein's The Invisible Wall , a memoir of his childhood and then I plan to read his third book, as well. I understand that he is working on fourth book and hope to enjoy it someday too.

Isn't that amazing, to start writing so late? It sounds like a lovely books!

This one sounds so good! I've really enjoyed reading your memoir week reviews - what a great idea this was, Tara!

I just placed a hold on both of them at my library! Thanks.

I'm impressed--you've zipped through some really interesting sounding memoirs! I seem to be stuck when it comes to nonfiction--yet again--even though I'm in the middle of two good nonfiction reads. I need to make more of an effort to spend time reading them rather than always reaching for a novel. And I know how you feel when you say 'written out'--that happens to me, too! :)

This sounds like a really interesting memoir... the fact that he started writing in his 90's is pretty cool. It's really never too late, and he sure proves it!

Staci, it was excellent!

rhapsodyin books, I think the author is amazing, yes!

JoAnn, thanks! This was an excellent book.

J.Danger, oh good! I hope you like them. But when will you have time to read them???

Danielle, somehow I just find memoirs easy to read and quick, perhaps because they are generally written in a conversational tone. Other sorts of NF takes me longer ususally.

Kim L, Yes, this is an excellent book!

I'm very picky about memoirs, so I'm not sure I could read this many at once. But the ones you selected sound really interesting.

Anna, I read all these over the course of a couple of weeks (along with other books) so it wasn't as back to back as it seems here. I just realized that with all the books I'd read I could have memoir week!