I'll never forget how I felt when reading Curtis Sittenfeld's first novel, Prep. Prep is the story of a teenager that goes away to a boarding school, by choice, and finds herself among people of a different economic background than herself. I felt her pain, her awkwardness, at times I cringed at the situations she found herself in. Sittenfeld has the gift of understanding human emotion, what people's innermost thoughts are, and she brilliantly transforms this understanding into words. 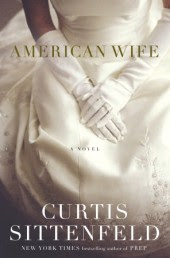 American Wife is Sittenfeld's third novel, and the third that I have read. It is the tale of Alice Blackwell, from her youth, to young adulthood, to life as a wife and mother, and finally to the White House where she is First Lady of the United States. Alice is written as a real woman, one that is flawed and yet likable, that suffers tragedy but is able to move on. I found myself immediately drawn into this novel, into the life of Alice, an incredibly well-realized character whose mind I felt privy to. At 550 pages, this is not a short book, but I found myself losing track of time and turning pages well past my usual bedtime.

What you need to know, and what you can read about on the web if you care to look, is that American Wife has stirred up a bit of controversy. Because the life of Alice, and the characteristics of her husband, bear a resemblance to the current First Lady and her husband. The portrayal of Alice is not unfavorable; that of her husband is another story. Some have cited, and published the 'steamy' scenes between the main characters. I decided to forget about all this and read it for what it was, which is a novel. Which was all well and good until I came to the last section of the book when Alice and her husband move into the White House and the similarities between fiction and real life become awfully hard to ignore. I won't discuss my personal politics besides saying that I am looking forward to a new administration. I will say that I didn't find the novel offensive, though the behavior of the President behind-the-scenes made me roll my eyes in dismay and embarrassment. What I most wondered, was why Sittenfeld chose to base her novel on these very real people. This article by Sittenfeld, entitled Why I Love Laura Bush, helps explain it to some degree. Obviously the idea of this book goes back at least to 2004.

I really liked this book, though the last section didn't hold my interest as much as the previous ones. There is never really a great turning point in this book, and maybe that is because we already know what is going to happen, how things end up for Alice. For the most part, this was a compelling read, and an interesting insight into what private life might be like for these most public people.

American Wife will be published by Random House in September. Many thanks to them for this advance copy.
Posted by Tara at 7:15 AM

I too think that Curtis Sittenfeld is a very talented young writer. Loved Prep and enjoyed her second book The Man of My Dreams (despite its yucky title!) Don't think this new novel is published yet in the UK but I'll look out for it. Nice blog, by the way. Regards, Nicola

I've never read anything by this author, although this does sound good.

Enh, I think I'll skip it. I'm not one for fictionalizing real people in any book. The Dante Club. A Million Little Pieces. There's something about taking liberties with a life and claiming novel that sets me wrong. (At least James Frey stuck to his own life. More or less).

Hmm, I think I'm with Carrie, although your description of Prep makes it sound awfully fun. What I'd really like to know is what she found so horrifying about the inauguration, but that means admitting I don't watch inaugurations. Or, much of anything else, for that matter. I'd rather have my nose in a book.

Hello Nicola! Thank you very much, and thank you for stopping by. I enjoyed Prep better than TMOMD (yes, icky title!), and do think Sittenfeld is quite talented. It will be interesting to see what else she writes.

Lisa, she's very readable...if that makes any sense. I'll be interested to read/see some interviews with Sittenfeld about this book when its release date is closer.

Carrie, I can see your point.

Bookfool, Prep is quite a book, much insight to what life at these private, exclusive boarding schools would be like. I'm not sure about the inauguration...that wasn't really dealt with here. The character in the book did not want her husband to be president, so I suppose that could be a possibility.

The cover freaks me out for some reason.

I've always been fascinated with Laura Bush as well. Bookworm. Librarian...and then she married...that?

Prep sounds really interesting..I might have to pick it up soon. Thanks for your review on American Wife, I will be sure to check it out when (and if) it comes out in Australia.

i had not realized this was a fictional lb story. i loved prep, but i'm not a fan of messing around with real people so much. thanks for linking up the salon article - i always love more info!!

Ah, I didn't realize that's what this book was about. Hmm, I don't mind fictionalized accounts but somehow prefer them to be set further (much further) back in time. I just mooched Prep and am looking forward to reading that one.

I really need to give her work a try. I have Prep and want to read it...eventually. This sounds interesting as well, though I think I would prefer it more fictional personally. Still the first part of the book does sound good.

Bybee, the cover is a bit much. I've actually tried to think what I might like better but haven't come up with anything. I've wondered the EXACT same thing about LB.

Sarah, thank you for your comments. I wonder if American Wife will come to Australia...it is very American-centric in some ways, and not in other ways.

Melanie, I love more info too, I was already searching for it midway through this book.

Iliana, very good point. I hope you enjoy Prep, I think Sittenfeld is a talented writer, even though as a reader, I didn't always love her characters or their behavior.

Danielle, the first half was definitely stronger, in my opinion. I hope you enjoy Prep...I have found her books to be quick reads.

How do you snag books early? I signed up to get this on Library Thing and didn't get it.

Kathy, I got this one from Shelf Awareness. Check out their newsletters.

I'm going to check that site out right now. Thanks!