Oh boy, was I ever down on book club yesterday. There were a whole bunch of things going against me yesterday that started with pretty much complete lack of sleep on Sunday night and working all day Monday. Being so tired I can barely string two thoughts together does not put me in the mood for chatty get-togethers. Half of the women stay home with their kids full time so they are all ready for adult interaction whereas I just want to discuss the book and go to sleep. Additionally, an old member recently rejoined our group, a person that I really like, but whose participation skews the conversation in curious ways. Towards camping and yearly trips to Disney World, extreme exercise routines, and long talks about dogs. We are cat people here. 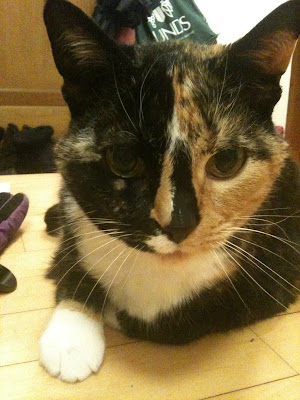 Do I sound cranky? Boy was I ever cranky yesterday. I composed 10 different emails telling everyone that I'm Not Coming! but didn't send any of them. My husband finally convinced me to go and leave early. I'm glad I did. All my complaints melted away as I enjoyed the company of old friends.

The book we discussed last night was Child 44

by Tom Rob Smith. It was universally liked my my book club in varying levels.

In a nutshell: Child 44 is set in Stalin-era Russia. Everyone is looking over their shoulder and trying not to draw attention to themselves, for if you are suspected, then you are guilty. And if your child is found dead, they weren't murdered, because there is no crime in the Soviet Union. Leo is a MGB agent and thinks he and his wife safe, until they aren't. On the sly, Leo begins investigating a series of child murders, which puts him family into even greater jeopardy. What he finds, is, well, surprising.

This is a thriller in every sense of the word. It felt like every time I turned the page, there were more twists and turns, and even knowing something was coming didn't damper my enthusiasm for finding out what it was. Setting this story in Stalin-era Russia was a brilliant decision. I found the entire setting so fascinating. I sort of knew that living under this regime wasn't a good thing, but didn't really have any idea of what went on behind the scenes, how citizens were brutalized and lived in fear. It was frightening, creepy, and disturbing. A great read, if you're into that sort of thing!
Posted by Tara at 10:27 AM

It is fascinating, if gruesome, but very well done, I thought.

I liked the book because it was so different from most thrillers that focus on the crimes themselves.

I'm glad you felt better after going to your book club!

Sometimes we just gotta force ourselves to do something we don't want to do but we know we'll enjoy it in the end.

Glad you enjoyed your meeting after so much dread. I hate it when I feel that way about doing something that I know I will ultimately enjoy. Book sounds very interesting.

I'm glad you enjoyed the meeting. I am not feeling the meeting mojo lately myself. I skipped this week's meeting and next month I have open house so I'll have to skip that one too. Our group has just gotten so large and there are too many new people to keep it intimate. It's just not fun anymore.

Glad your meeting turned out to be fun in the end and I love the cat pic!

I've felt the same way you did before and whatever event I've thought of skipping always turns out to lighten my mood. Glad you had a good time and enjoyed the book.

Been there, done that, with the book club. And it's OK for you to sound cranky with us. If you can't say ithere, where can you? :-)

As to the book, I've been meaning to read this one for some time. I think it might go well at my mystery group but I may have depressed them enough for this year. We'll see. thanks for sharing, Tara.

Boy Tara do you ever sound like me. I've felt like this so many times, but when I end up going it is always fun.

BTW: Your cat is absolutely adorable!!

What a cute kitty!

I am always deciding I am too tired for things; my resolution this year has been to stop using tiredness as an excuse (if possible) for avoiding social interaction. It's rewarding! :P

Child 44 sounds very good - a real thriller of a read and i enjoy reading about that period as well.

Hope you are better rested now!

So glad the meeting made you feel better... it was nice of your husband to urge you to go. So did you still leave early, or were you having too good a time?

Karen, I don't think I realized you had read this!

rhapsodyinbooks, absolutely, me too. I usually am much more interested in the 'scenery' than the crime!

L.Diane Wolfe, that is so true! Yeah for kitties!

Bree, thanks. When I am so busy and tired it goes from something I enjoy and look forward to, to something I dread.

Ti, I don't blame you! We have a nice size group - 8 right now though it is sometimes less. I think a large group would be difficult - and make it easier to skip!

avisannschild, thanks and thanks! Isn't she cute!

Kathy, thanks, that's exactly the effect the mtg had.

Kay, oh thank you. This was me talking without a filter, you know what I mean? Sometimes you need that. Great choice for a group - though it is depressing. But aren't most mysteries?

Hannah, absolutely a great read, and yes I am finally feeling better!

JoAnn, he's a good guy. He even called me to make sure I was okay - I was telling him I was too tired to drive. I left early in the middle of a discussion, more interesting than the ones about extreme exercise, but I really needed to get to bed.

My book group is experiencing growing pains, too. We have a member (fairly new to the group) who has a terrible habit of interrupting with off-topic remarks, often quite loud and boisterously. We thought she was simply nervous at the first meeting, but now we realize it's her personality and it's beginning to grate on some of the members' nerves. I'm one of the founding members, so at our next meeting (Monday), I plan to spend a few minutes reminding everyone of the general "rules" of the discussion. Hopefully, this will help. If not, I guess I'll have to have a private chat with her before she starts driving members away from the group.

I'm glad you wound up enjoying yourself. The book sounds interesting. My husband might enjoy it, too!

I came to your blog via A Work in Progress. Couldn't resist a blog with two of my favorite things in the title! Then this post--haven't read the book, but zeroed in on the remark "We are cat people here"--another favorite of mine. I'll definitely be back!

I loved Child 44--it was a really gripping read. He has another book which didn't get hardly any press and I am not sure what the reviews ever were about it--but this is a reminder to see if it is out in paper. I enjoyed being in a book group, but some of the extra non-bookish chatter would get on my nerves. New people in the group always tend to change the dynamics it seems.

Love the kitty pic by the way!

Les, your new book club member sounds really disruptive. I hope the talk goes well. I think my husband would enjoy this book too! But he's more of a NF reader.

Jean, thank you for stopping by!

Danielle, I peeked at the reviews for the new book on Amazon. Generally they seem to be not as good as Child 44 but I'd still like to give it a try.

I'd read other reviews about Child 44 but didn't feel like adding to TBR until I read your review :)