I bet the title of this post really makes you want to keep reading! As we near the end of 2009, my thoughts are turning to what were my favorite books of the year. Not wanting to be rash, I'm keeping my mind open to current and recent reads. But let me tell you, not a one is making my list! Sure, there are plenty of good books, but I'm looking for WOW books. I keep having the same problem lately - a book starts out really well, and then, well, it fizzles, it just doesn't maintain the power it had at the beginning. Here are a few examples. 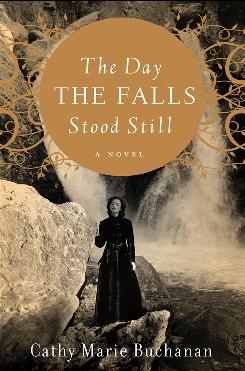 The Day the Falls Stood Still

by Cathy Marie Buchanan was I book I expected to love. I loved the cover, loved the topic of Niagra Falls in the early 20th century, and devoured the vintage photographs so wonderfully included. The story focuses on Bess, once well to do, her family is now down and out, clinging to their old life by a social thread. Bess falls in love with The Wrong Sort of Boy, Tom Cole, grandson of a heroic riverman and a bit of a hero himself. The story becomes partly one of war and how it changes everything, one of industry and debate as the power of the falls is utilized for electricity, and one of life and tragedy. Overall I liked this book, though I would say I loved the first half and found it to be a pageturner. As I continued reading, I found myself less interested in the characters and somewhat unsurprised by the twists and turns at the end.

Changing gears a bit, I came across Minette Walters as an author comparable to Barbara Vine. I was sold! I chose to read Walters' debut novel, The Ice House: A Novel

. The Ice House began well, as a body is found in the ice house of a country manor, a place where a man, the husband of the current resident, disappeared. There has been a murder investigation here before - coincidence? This was sort of a quirky murder mystery. I mean, I don't' read many books when the police force comes across as incompetent and the suspects practically seem to be egging them on. Everyone is lying in one way or another. I liked this book right up until the end, when the tone changed from quiet and suspenseful to crowded and confusing with a lot of people showing up and shouting at one another. I read somewhere that Walters doesn't know who is responsible until she's written half of the book, and I'm not so sure I like this idea. Perhaps I prefer a more 'crafted' book in which hints are dropped and feelings are alluded to along the way. Not to say I won't try Walters again - I definitely will.

Sorry the books are fizzling out for you. It's soup weather here, too, so I can only imagine how cold it is there.

I read The Day the Falls Stood Still a couple of weeks ago and was surprised at how much I enjoyed it. I read the whole thing in just a couple of days, so it didn't get a chance to fizzle. :-)

My problem is the exact opposite. I read a lot of fantastic books this year and I'm afraid my FAVE list will be too long!!!

FALLS was a quiet sort of book. I appreciated the simplicity of the story. Perhaps such a simple storyline is not for everyone. I must have read this one at the right time because I loved it.

Books that fizzled for me this year:

Her Fearful Symmetry
The Angel's Game

Have you read The Help? I'm too lazy to look through your archives. This is the only book that really WOWED me this year. Lots of good reads, but that was the best of all.

Ah! I should have read your previous post. Now I know you've read The Help. It'll be a great book club discussion. My group loved it!

Very well expressed, Tara. I like esp. when you spoke of the ending of the Walters' book - 'from quiet and suspenseful to crowded and confusing' - no book critic could have put it better!

Teresa, I'm glad you liked this more than I did!

Staci, you are a lucky lady then in my opinion! I've read plenty of good reads, just not WOWs!

Ti, I'm glad you got more out of this than I did. I hope Her Fearful Symmetry doesn't fizzle for me!

Les, I loved The Help, and yes, it was a WOW for me for 2009. Glad to know your group had a good discussion about it.

Nan, oh thank you, as always, you are too kind!

I had very similar feelings as you about The Day the Falls stood still. I found the ending predictable as well and expected to like it much more.

I loved The Help, it was one of my favorites books this year.

Yum, that lentil soup looks and sounds so good.