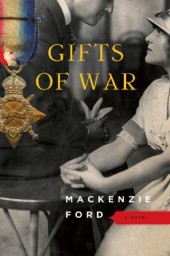 Set during World War I, Gifts of War: A Novel

is the story of a British soldier named Hal, who is involved in the Christmas Truce of 1914. Hal meets a German soldier Wilhelm at that times who entrusts Hal with a photo of his English girlfriend Sam in the hopes that Hal can let her know he is alive. Hal is injured during the war and sets out to find Sam. Upon seeing Sam, Hal is so taken with her that he does not reveal his true purpose and instead sets out to become romantically involved with her. Hal discovers that Sam is the mother of Wilhelm's child which puts her in a precarious position both in the village and in her job.

A large portion of the book deals with Hal's career. Hal's service on the front lines and his extensive knowledge of German give him exciting employment opportunities with the war ministry in military intelligence.

While readable, I found Gifts of War to be an odd book. Set up as a story of passion, the relationship between Hal and Sam come across without passion, instead there is a lot of talking. The truth is, Hal 'fell in love' with Sam at first sight, based on her appearance. Obviously, at the time men were in short supply, Hal could have had any woman he wanted. Even considering the fact that Sam's boyfriend is the enemy, I still found Hal a morally corrupt person to have broken the pact he made with Wilhelm.

I found the portion of the story that dealt with Hal's military work to be the most fascination and engaging aspect of this book. I sensed that the author felt more assured to be writing on this topic than of the love affair. This makes sense, considering the description we have of author Mackenzie Ford:

Mackenzie Ford is the nom de plume of a well-known and respected historian who lives in London.

Gifts of War ends in an unsatisfying way. It made me wonder what was the motivation to write this book in the first place. The author writes about military intelligence in a fascinating way, but it seems he or she threw in the romance to attract a more varied audience. The premise is certainly interesting and includes a moral question but the ending of the novel does not reflect any moral resolution.

Many thanks to Doubleday for this review copy.
Posted by Tara at 10:11 AM

Yeah, I sort of hated Hal, and I hated the ending!

This isn't a very original set-up either, is it? I don't think anyone comes out looking good in the "fall for the girl you are supposed to deliver a message to" plot line.

I am finding more and more recently that books that say "so and so is a historian. This is their first novel." will have amazing settings and background and not so good plots or characters. Not that historians can't start writing novels but that maybe someone should suggest fiction writing classes to them ...

I'm not sure if I want to read this since Hal isn't a great character and the ending's not so hot either.

I requested this book and I was looking forward to reading it, but all I've seen are lackluster reviews. I'll still give it a go, but I don't have high expectations.

I agree with you on this one. It was just impossible to get interested in Hal and Sam's romance when Hal's motivations and actions were so corrupt from the start. I kept waiting for a confrontation--for Sam to get a chance to make a real choice based on knowledge of the truth, but then we get the stupid cop-out ending.

The parts about the intelligence agency were interesting, and I could have done with a whole book focused on that, but it was never more than a sideline. Too bad.

I thank you very kindly for spending your precious time reading and reviewing this book...doesn't sound like my cup of tea.

Normally I love World War I books with British people in - I'll steer clear of this one, I guess. I'm curious about what makes the ending so cop-out-y and bad. :P

I'm sorry this one didn't quite live up to expectation. I have this in my TBR collection, but admit I'm drawn more to the other books around it right now. I appreciate your great review, Tara. Thanks for the insight!

rhapsody in books, he was just horrible! And the ending was a cop-out, and sort of gross too.

Kathy, I don't blame you!

Anna, I had low expectations too...I guess they were met!

Teresa, I was disappointed that Sam was never given a choice, and that Hal never faced the music. I agree with you about the military intelligence, I would have preferred a book focused on that.

Staci, it was my pleasure. ha!

jennysbooks, me too. It's probably not worth finding out (then ending)!

Literary Feline, I'll be interested to see what you think.

I didn't like this one either. For me, the one thing that got me was that it "sounded" a lot more modern than the time period it was set in. I can't think of any examples now as it's been a while but overall just didn't like it. Shame as I had such high hopes for it too!

Iliana, I agree with you, about it being modern. I guess that didn't bother me as much as the other things! It was a disappointment for me as well.

How disappointing--it sounded so good, so I ordered it but haven't had a chance to pick it up yet. Will have to save this one for later, but I'll give it a try and see how I get on with it.

Danielle, I know. Perhaps you will like it more than me.