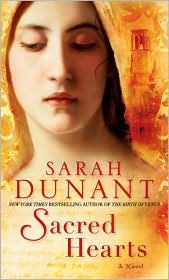 Upon beginning Sacred Hearts: A Novel

, I didn't imagine that I'd find myself completely wrapped up in this story about an Italian convent in the 1500s, but I absolutely was.

Sacred Hearts focuses on a period of time during which dowries were so high that families were perhaps only able to afford to marry off one daughter, and the other or others would be placed in a convent. Serafina is one of these young women, who has been placed into the convent of Santa Caterina against her will. She has arrived at the convent after an unapproved love affair and her story is full of all the passion of youth and young love. Her anger and grief are overwhelming when she finds herself suddenly living in what is essentially, a prison. One of the sisters, Suora Zuana, is touched by Serafina and attempts to make her more comfortable as she adapts to convent life. Zuana is a fascinating character and much of the story is told from her perspective. Thanks to her father, Zuana is knowledgeable about diseases and cures and her work at the convent is as the dispensary mistress, sort of a combination of physician, nurse, and pharmacist.

Sarah Dunant has created an amazing world within the pages of Sacred Hearts. As a reader, I felt so powerfully the sense of isolation these women must have felt, living in the middle of a city but unable to see outside the walls of the convent. Just as in the world of a convent, there are no men that even speak in this book besides a few words from the bishop. Because of all this, I felt almost as a voyeur, being able to see inside the world of these nuns. For some the convent seems a prison, at least at first. For others, the convent serves as a refuge, the only place to go once they are released from an unhappy life. For a few, they came to the convent because they were called.


I enjoyed this book very much, and then I heard a story that made me appreciate it even more. There is a woman that I work with that I often discuss books with. I was telling her about this book and when I finished she told me that it sounded like her mother's life who grew up in the 1950s. It was tradition in her Catholic family that one child would be 'given' to the church and she was chosen by her mother perhaps because she was favored by her father. She stayed with the convent for a number of years, until she suffered an nervous breakdown because she was so unhappy. When she was finally able to leave the convent she was treated so terribly in her small town for the 'shameful' thing she had done she had to move away. Her life did have some happiness, but ultimately ended in tragedy, her daughter suspects from the guilt she felt from leaving the convent.

All this to say, that throughout history, oftentimes women's lives were not their own to live, to make choices about, to enjoy.

Many thanks to Librarything's Early Reviewer program for this review copy.
Posted by Tara at 9:43 AM

This does sound fascinating. I'm reading The Book of Unholy Mischief and it's set in Italy in the late 1400s - it says a woman's only options are marriage, prostitution or the convent. It makes me thankful I didn't live then!

Sounds wonderful; glad you enjoyed it! I wish I could read 2 or 3 books a day--there are just too many I want to read now..LOL

I thought the same thing: how unexpected that a book about a convent was a veritable page turner!

I'm so glad to hear you enjoyed this one Tara. I got an ARC and am definitely looking forward to it. Was this your first Dunant book? I read another of hers but with a modern setting and it was very good so I'm definitely curious about this one.

Tara - I loved this book and reviewed over on Random. Having been a convent girl this sent shivers down my spine!

Thanks for the comment left over on blog - my back is now OK but my left foot is black and blue - it has NOT been a good month....

This one is waiting for me!! So far I've only read great reviews like yours on this book!!

I have a thing about sort of shut-in spaces - convents, boarding schools - cannot resist books set in these places. I'm really excited to read this!

Bermudaonion, not great choices, are they?!

Diane, I know what you mean, I wish I were a speed reader.

rhapsody in books, yes, it was totally unexpected!

Iliana, I hope you like this! It was not my first Dunant book, it was my third, but my favorite by far. I was disappointed in Birth of Venus and confused by Mapping the Edge.

Elaine, yes, I saw that you loved this! It's amazing how much power the Catholic Church has had. Fingers crossed that you don't hurt anything else!

Staci, I hope you enjoy this ! I havne't read any negative reviews either.

Catholic church and men. (Had an amazing amount of power). Makes me very happy to be living here and now.

I'm kind of fascinated with convents since I read "A Nun's Story" when I was a teenager. It's such an interesting setting. I'll look out for this one! Thanks for the review :)

Good gracious! That's so sad. I reviewed this book recently. I loved the picture it painted of life in a convent during that time. It was the details at the end of Serafina's story that didn't sit so well with me. But historical content and atmosphere setting look to be Dunant's specialty.

After reading your review, I'm thankful I received a copy of this book unexpectedly. I wasn't sure about it at first, but it sounds like a great read.

Gentle Reader, it's such a fascinating subject - convents.

Petunia, I know what you mean about the ending - it would never have happened. But I guess I wanted it to happen (made it an interesting story anyway) so I didn't mind, plus I liked the rest of the book so much.