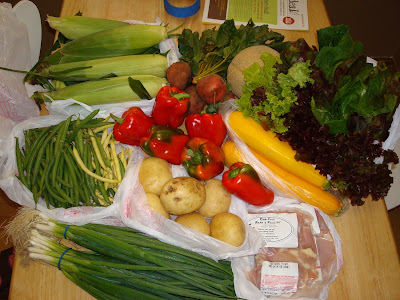 Why yes, yes I am planning on doing some cooking this week! New additions today include red peppers, golden beets, and a melon. I haven't had great luck with the melons at the market - they've tended to be mushy in the past - but I'm trying again.

I didn't make it to the market last week, but 3 friends gifted me with produce during the week. Plum-sized tomatoes (used for salsa), large heirloom tomatoes (used in tomato/mozzarella/basil salad -yum!), and corn and squash from the CSA box of a friend of a friend. That friend said I was the only person she could think of who would get excited about free vegetables. She was right, I did. My in-laws were pretty impressed when we received two deliveries on the same evening.

Are there any gardeners out there that can advise me about whatever this zucchini plant fungus/rot thing is? There were white spots on the leaves which then became white powder all over the leaves. My plants are done for, and I think they had this last year. Should I not plant again this coming year, or am I supposed to treat the soil in some way? Enquiring minds want to know.
Posted by Tara at 10:32 AM

Sorry I can't give advice but the photo looks scrummy!

Tomato mozzarella salad is one of my favorite summer delights!

That salad does sound yummy!!! I love your Farmer's Market posts!!

Hmm, have not had zucchini rot problems before. Have not actually grown zucchini either ... sorry.

Farmer's market weekends are so nice. We picked up blueberries for cream cheese tarts as well as zucchini and two kinds of peppers for pasta. Mmmmm.

I Googled your problem and it said that that happens when the plants are cramped and do not get enough sun, or enough air flow between plants.

I am v. jealous of your heirloom tomatoes and that salad with the mozzarella is always just so yummy!be

I get excited about free veggies, too. A neighbor gave me a lovely bagful of delicious tomatoes. They disappeared very rapidly!

Those bell peppers look wonderful! I haven't seen any at my farmer's market. Maybe next time. We're out of town this coming weekend, so I'll have to check in September.

Staci, Thank you for saying that - my husband said - do people really care about these pictures anymore? I don't know - but actually it's been really handy for me to be able to look back.

Ti, thanks! I'm guessing it's the cramped thing - I have a tiny little patch where I grow things.

Samantha, the tomatoes were so tasty and beautiful - I'd like to get my hands on more of them!

Les, This was the first week that I've seen lots of peppers. I'll also be missing the market this weekend and am hoping to make my tomato sauce in September.