I'm feeling all out of sorts today. It's been a strange stretch of days here. Late last week when I was taking both members of my family to the doctor I was feeling all smug and healthy when suddenly my stomach started hurting. Ugh! So most of my weekend was spent in pain in the hopes that it wouldn't move to my right side (appendix) - it didn't. Whew. What else? It's freezing here! I actually broke down and turned on the heat last night after pulling out my down comforter and fuzzy socks on Friday night. Brrr! And today is the Last Day of First Grade. I can't believe it! I get stressed during change and next week my girl is starting a new camp with new people And I'm not sure how it's going to go And I work weird hours so our schedule is kind of wacky And I'm trying not to be annoying, I really do not want to be annoying but I want to make sure everything goes well next week And that the people don't think we're crazy because of our crazy schedule. Whew. Not to mention, that the place where the camp is is a place where we might want the girl to go to school someday so I want to make a good impression. Yep, I'm stressed.

So, should we talk about books now? Okay. 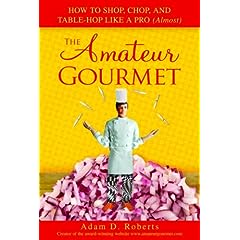 Well, after I finished Molly Wizenberg's A Homemade Life, I naturally did a little google searching looking for interviews and such. I came across the blog of Adam Roberts, The Amateur Gourmet and realized he had a book. Something about him sparked my interest as well as the fact that there was apparently a chapter in his book in which he dines with foodie extraordinaire Ruch Reichl, so I picked up his book, aptly named The Amateur Gourmet: How to Shop, Chop and Table-Hop Like a Pro (Almost) at the library.

Roberts comes from a family where reservations are made instead of dinner and he did not begin cooking for himself until adulthood, though he's quite able now. Besides the dinner with Reichl (which I loved), highlights of the book include how to shop at the grocery store or farmers' market and a trip to a famous knife sharpener. This is a good book for beginning cooks - Roberts aims to take the fear out of cooking, or for cooks like myself who are interested in the inner food world. The book is a short quick read (less than two hours, I'd say), and Roberts has a fun and easygoing voice. I recommend it - especially if you get it from your library. 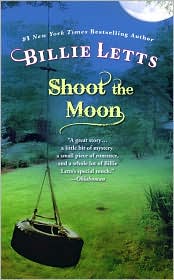 I won Shoot the Moon by Billie Letts - I think it was practically impossible not to win a copy there were so many giveaways a while back. I was looking forward to this book since I'd heard good things about the author (Oprah-approved) and the premise sounded interesting.

In 1972, windswept DeClare, Oklahoma, was consumed by the murder of a young mother, Gaylene Harjo, and the disappearance of her baby, Nicky Jack. When the child's pajama bottoms were discovered on the banks of Willow Creek, everyone feared that he, too, had been killed, although his body was never found.

Nearly thirty years later, Nicky Jack mysteriously returns to DeClare, shocking the town and stirring up long-buried memories. But what he discovers about the night he vanished is more astonishing than he or anyone could have imagine. Piece by piece, what emerges is a story of dashed hopes, desperate love, and a secret that still cries out for justice...and redemption.

See, sounds good, right? To be honest, I don't have much to say about this, that is good anyway. I found the writing style very simplistic, thought the overabundance of characters with odd names were underdeveloped, and the romance was implausible. The word that keeps coming to my mind is pedestrian. Read something else.
Posted by Tara at 10:19 AM

My little one graduated from Kindie this week and both of my kids are in a new summer day camp program this week so I can totally relate to your added stress level!

This camp involves swimming twice a day and my little one still does not know how so I am a bit nervous about it but my son said they are keeping her in shallow end and working with her so maybe I will have a swimmer by summer's end.

I hope things calm down for you a bit soon.

it's o.k. to be stressed...I get it! The Amateur Gourmet sounds like a fun read! I've heard that about Shoot the Moon and now I'm going to make sure that I don't bother with it!! Which is such a letdown because I loved Where the Heart Is.

Stress = sickness ; Sickness = stress. One cannot win sometimes! Sorry to read of your recent worries. I hope everything turns out ok - just don't stop reading as this can only add to one's stress levels :-)

Tara...i hope things will be looking up in a few days for you.

I hope things improve for you, soon. Sorry that of all the things to read, the book you latched onto was "pedestrian". I wish you a good read that will lift your spirits.

Samantha said it - stress=sickness. It's such a cycle too isn't it? I am sending you some good vibes and hope life gets a bit more calm and back to normal for you soon!

Oh and better reads ahead! :)

Uh oh, sounds like a busy slightly worrying time. Go ahead and be annoying.

Bummer that the book was pedestrian. Amateur Gourmet sounds pretty good though.

Sorry to hear you were feeling out of sorts; I hope this day is better than Tuesday was! I'm also sorry to hear that Shoot the Moon was pedestrian, as I also won a copy! Guess it'll go to the bottom of my pile now...

I had a similar reaction to Shoot the Moon. Found it to be very disappointing. My review is here.

Hope life improves for you quickly!

hope things are shaping up by you! i just had to comment on the amateur gormet--i love ruch reichl and devour her books! i'm not nearly as brave as she is with tasting new foods, but maybe adam roberts will help me find my way!

Ti, I can totally understand being nervous about the swimming! I bet she is a little fish by the end of the summer!

Staci, I'm seeing that lots of people loved Letts' earlier books - but not this one.

Samantha, you are certainly right about that.

Bookfool, thanks, I have been reading some better books, and that helped.

Iliana, it is a cycle, absolutely. Thanks for the good vibes - they helped!

Carrie K, thanks, AG was a fun read.

avisannschild, perhaps you'll like Shoot the Moon more than me, you never know.

Les, thanks for the link. I don't know that I'd read this author again.

booklineandsinker, I loved Ruth Reichl's books too - the one dealing with her stint as a reviewer is hilarious. Funny, another book I just finished also mentioned Reichl during her reviewing days - Spiced by Dalia Jurgensen.

Sorry you didn't like book. The reasons you stated are exactly why I like her books. Simplistic, odd, qurky. Oh well... I guess I like my pleasure reading easy since I do so much school reading.

Bree, to each her own, right! It was just too silly for me, and probably my mood wasn't right for it.