I've been rereading Jane Austen's Emma for my May book club meeting. I cannot wait to see what reactions people have to this novel. I suspect at least one person will not have been thrilled with it.

I doubt that I'll write any sort of review of Emma, but wanted to mention a few things that have made this reading special for me. I warn you now, that there will be spoilers in this post, so if you haven't read Emma, you might want to look away.

I purchased this book, Jane Austen, The World of Her Novels by Deidre Le Faye a few years ago. 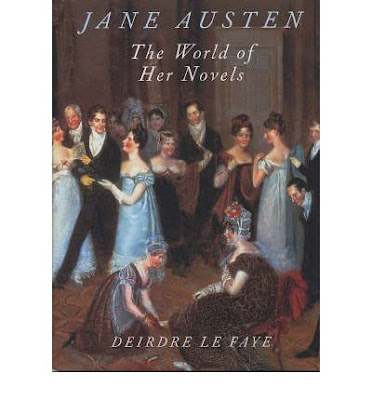 It was one of those book that I just had to have right now but of course, years have passed, and while I've browsed this book many times, I've never properly read it. The second part of this book features chapters on each novel, with fairly extensive plot descriptions as well as commentary. The plot descriptions are rather lengthy but have been useful for me in perhaps pointing out things that I missed.

The author mentions something I've read or heard before, that is, that Jane Austen considered Emma a character 'whom no one but myself will much like' and I think that is really true. Emma is truly a difficult character to like. She is attractive and rich and appears to think herself much better than other people. I wonder if readers 200 years ago found this characteristic as unpleasant as I do now. Le Faye also mentions the fact that in Emma, Austen has created a detective story, that in fact 'the clues to the secret engagement between Frank Churchill and Jane Fairfax have been there all the time, but because Emma did not notice them, neither did we.' I have found great pleasure in seeking out these moment in the book that seem to point to one thing, when another thing is the truth. Frank Churchill is the cunning man in this novel, who is charming but dishonest, who we root for to start with and later wonder how we didn't see his true self.

This chapter on Emma ends with some thrilling revelations. Austen was obviously quite involved with and fond of the characters she created and we know this because she talked about the characters with her own family and what they were doing after the book ended. For example, Emma and Mr Knightley lived with Mr Woodhouse for about two years before they were free to live at Donwell. Jane Fairfax only lived 9 or 10 years after her marriage due to tuberculosis. She told them other little secrets and idea of future matches, and the fact that Mr Knightley was one of her two favorite characters, along with Edmund Bertram. Le Faye includes these sorts of insider tidbits for several of Austen's books making this book a must for Jane Austen fans.
Posted by Tara at 1:02 PM

I actually really like Emma as a character. She is nosy and bossy and often, often wrong, but I find her so endearing. I like seeing her grow up, and I always imagine that she grew into a really cool lady, and an excellent mother.

I see Emma as a character who grew into a likable person.

I hope your book group likes Emma better than mine liked Persuasion. Only two of us even finished it! The other three who came just couldn't get into "all that old-fashioned language." Grumble, grumble.

I had to look away because I haven't read Emma...yet. I'm planning on getting to it this summer. But I've marked your post in my goodreads account so that when I'm done I can come back and read it to the end!!!

After Mansfield Park's spiritless little Fanny, I was so happy to see Emma, flaws and all!

I just read that Charlotte Bronte didn't like Emma...no reason why given.

This sounds like a fantastic book for a Jane Austen fan - I will have to look out for it.
Emma is probably one of my least favourite characters from Austen's books (although Fanny Price from Mansfield Park is also up there) but I really enjoy reading the book - I love the story line.

i adore austen's books...p&p is a fave that i read once a year. i just love her characters...and her writing...and her imagery. the fact that so many of her characters a dynamic and they change and grow as a result of their actions...i just can't get enough!

Both the novel and the character of Emma are favourites of mine. Fingers crossed your book group likes it!

I love Emma for her faults - yes, she has far too high an opinion of herself, but she grows to realise where the worth of other people lies. I think what shines through the writing is that Austen *does* like Emma, and I'm sure Jenny is right, that Emma grew into a wonderful mother.

The book has some of my favourite Austen characters - I love Mr Woodhouse, Mr Knightley just might be the perfect man, and Mr and Mrs Elton make me think of fingernails on a blackboard, they are so horrible!

Jennysbooks, I'm around halfway through the book right now, so Emma has not 'turned over a new leaf' yet - I'm sure my feelings toward her will change as I keep reading.

Teresa, I think you are right! She is certainly very compassionate towards her father, for example. Oh no! (your bookclub) It will be interesting to see the reactions.

Bybee, Fanny is rather dull, isn't she - not my fav. of Austen's books in any case. Interesting about Bronte!

Karen, this is a great book ! I highly recommend it. I love the story line as well, love the FC twist!

booklineandsinker, p&p is my fave, too. As a writer, Austen is pretty perfect!

adevotedreader, I sure hope so! In any case, it will make for good discussion.

GeraniumCAt, I couldn't agree more with you assessment of the Eltons. I'm going to say, that Mr Woodhouse is getting to me a bit this time around - so much complaining about sickness!

I like Emma too - because event though I may tsk tsk, her intentions were good. And you get points for that :)
But Elinor Dashwood will always be my favorite.

Oh great, now this is a book that I have to get right now! ;)Seriously, great review. I love to read the back stories of authors and their works.

I only read Emma a couple of years ago and believe it or not I didn't really know much about the book until I read it.

At first I didn't like her very much either and I was kind of surprised by that because I just assumed all of Jane Austen's characters (especially the women) would be likable but she quickly grew on me. I guess because I felt like I saw her for what she really was like.

Hope you have a great discussion with your group. You'll have to let us know how that goes :)

Melanie, you do get points for that! She does mean well. Elinor Dashwood? Interesting!

Lisa, I love it too!

Iliana, I think it says a lot about Austen that she created this character - makes me hungry for more information about her that we'll never know. I'll let you know about our discussion - should be interesting!

Emma is my least favorite of Austen's books (even Mansfield Park!) because I don't like the character. But maybe I should re-read it. There's probably more to it than I got the first time through -- there usually is!

I adore Emma because of her imperfections, her nosiness, her bossiness, in fact she is just like you or me. I also love her because of the patient way she deals with her father, he would drive me mad, and also her self knowledge near the end of the book. Persuasion is my favourite Austen but this is a very close second. I have this la Faye book on my shelves and must now pull it down and read it!

Jenny, really?? I think I'd say Mansfield Park is my least favorite. I am liking it (though I'm still not finished!)

Elaine, Perhaps that is why I judge her, because you are right, she is human, just like we are. I couldn't agree more with about her behaviour towards her father, I too would go mad. I also love Persuasion and would like to re-read it soon as well. The la Faye is a beautiful book!

I've reread all of Austen's books so much, and last fall when I was going through a really rough time, Emma helped get me out of it. Before then, it had never been one of my favourites, but the whole 'Emma makes a ton of mistakes, but her life works out in the end' theme really made me feel better. :D

Hi Eva! It's good to 'see' you! It's cool to know you've found comfort in Emma! I bet you would like this book then!