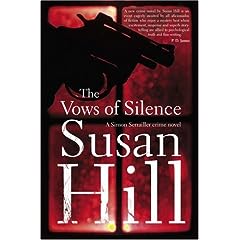 I began reading Susan Hill's Simon Serrailler crime series late last year and having finished the fourth book The Vows of Silence this week, I'm all caught up. I've written about Hill's books here, here and here. I've come to realize that this series isn't for everyone, which is apparent from the Amazon reviews. Simon himself is not the most likable character, and in fact it often feels as though he isn't the primary character. Despite this series being marketed as a crime series, in actuality the books have a pretty domestic feel to them, the major characters have story lines that carry throughout the books and there are a lot of secondary story lines. The murder/crime portion of these books is unique in that we generally get to know the victims at least a little bit before their demise which makes me feel rather worse about their deaths. Whenever Hill introduces a new character within the text, my first thought is always 'I guess he/she is next' and I'm usually right. All this to say, that while I really enjoy this series I recommend it with caution.

In this fourth installment Simon and the rest of the police force are trying to catch a skilled marksman who is smart and sure of himself. He targets brides or the newly married or engaged in particular. Other story lines involve the adjacent characters, Simon's sister Cat plays a large role in this book among other characters whose stories I won't reveal for fear of spoiling earlier books. A young female priest Jane who Simon may or may not be interested in returned briefly, leaving possibilities open.

I enjoyed this book very much, I haven't read many series books as an adult but I'm finding that they're really comforting - aside from the murder component - in that I can just fall into them and enjoy the ride with characters I already know. The fifth book in this series is coming, apparently, later in 2009 - I hope! I already cannot wait and will be ordering it from The Book Depository. The first three books are available in the US currently.

Inquiring minds want to know - Do you read series books?
Posted by Tara at 11:10 AM

I've read only two of this series, I think, but I enjoyed them enormously and shall definitely read more.

I'm a big fan of crime/mystery series but unfortunately this one isn't for me. Mainly because I never liked Simon. I do think she sets up a wonderful setting though - you can just imagine the place she talks about can't you? Anyway, I'm glad you are enjoying the series.

Yes, I'm a serial series reader, so to speak. You name it - horror, fantasy, crime, whatever - if there's a good series in the genre, I'll read it. I must get back to these SS books. So far I've only read the first one and liked it a lot. Interesting to hear that that habit of introducing a new character and then killing them off is a recurring thing in all the books. I did wonder about that.

I enjoy series books, always have. Sci fi, cozy mysteries, thrillers, they're all fun and it's always nice to sit down with an old friend.

I read the first book in the series last summer and enjoyed it a lot. I've had the second book sitting in my tbr pile for quite a while now, waiting for the right moment to pick up. I find Hill's writing to be just beautiful, very eloquent.

Cornflower, I'm glad to know you are a fan - and I'm not surprised! Susan Hill certainly has a way with words.

bermudaonion, I'm glad you think so!

Iliana, I can totally see where you are coming from. Yes, I do love the setting of Lafferton - though they do seem to have a lot of crime there! ;-)

Cath, I'm betting you'd like the rest of the series - they seem to have the same feeling/atmosphere.

Ms. Bookish, you have more willpower than me! I rushed through the books so that the characters would be fresh in my mind. You have lots of good reading ahead! I agree, Hill's tone is just perfect.

I very rarely read series books, although I used to. I was addicted to Sue Grafton's alphabet mysteries and I loved Bernie Rhodenbarr, both during my mystery phase. Now, if I do read a series, I space the books out because they tend to irritate me if I read the same style repeatedly.

I have often loved series, and part of what I like is really getting to see the characters develop over time. Laurie King does this particularly well.

I am a big series reader. Sometimes the ride is wonderful but I've given up on a few authors because it felt like they were just churning out stuff nothing quality.

I have the 1st Susan Hill book: Various Haunts on Men. (Hope to read it soon and continue the series.

I love your blog! Especially that you've kept such careful track of your readings through the years. I'm inspired!

Bookfool, that's interesting! I didn't read them for a long time, probably for the irritation factor you mentioned.

Jenny, I agree! I've read the first couple in the Laurie King series and cannot wait to see where it goes.

Staci, I can completely see your point, I can see how that can happen with authors.

Diane, I hope you enjoy the book!

Prudy, thank you! And thanks for stopping by.

I have the first Serrailler novel and I really do need to pick it up--I think I will like it! You probably already know I follow lots of mystery series--they can be very addicting--and also comforting to revisit the same character.