What I Ate This Weekend

I worked all weekend so I have nothing bookish to say. Since I was working all weekend I needed something to eat at work and I'm tired of soup. I can't believe I said that! And the food at work, well it leaves a lot to be desired. I wanted to make some sort of grain salad that would hold well and I came across a picture on Tastespotting which led me to someones post (cannot remember where) which led me to Closet Cooking and this post which was my inspiration. Mr Closet Cooking has posted loads of farro salads and I was going to do this one with cauliflower and chickpeas, but with a few minor changes. But Whole Foods didn't have cauliflower but did have asparagus so I went with that. Even though the asparagus is from Mexico, at least my kid wasn't going to eat this.

So here's what I started with. 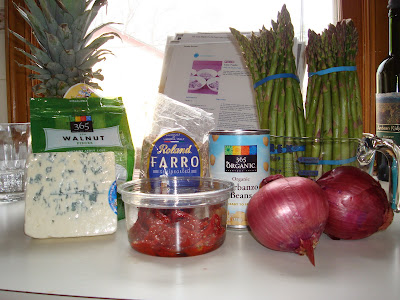 I already had farro, which is kind of expensive, but wheat berries or brown rice would work well here and cost lots less. I had a craving for blue cheese so that was on the ingredient list. I had those walnut pieces in the fridge and toasted them. Those fabulous roasted and marinated tomatoes are from the Whole Foods olive bar and they are out of this world. But you could use sun dried tomatoes, or halved cherry tomatoes, or no tomatoes. Or even, red peppers which Mr Closet Cooking used. Red onions, chickpeas, that's it.

I boiled the farro for around 20-30 minutes and while that was cooking I roasted the asparagus and onions. 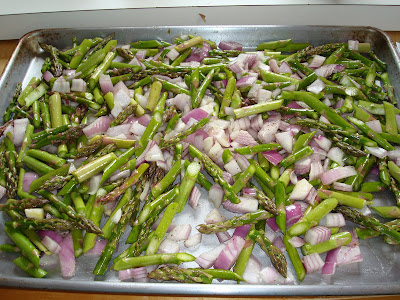 And I made the vinaigrette with everything you see here. Okay, not the pineapple. I love using those jam jars to make dressing in. So cute! The jam that comes in them is not bad either. 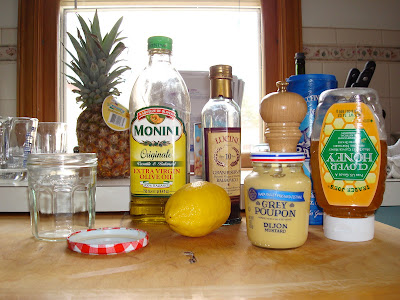 I then combined everything: farro, roasted veggies, toasted walnuts, drained chickpeas, diced tomatoes, and crumbled blue cheese and tossed it all with the vinaigrette. Here is the final product. 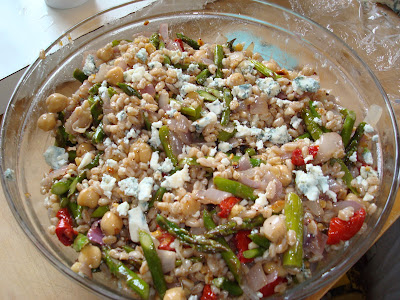 It was really tasty and I didn't mind eating it for three days straight.
Posted by Tara at 10:45 AM

I love all of those ingredients! That looks fabulous. I made some plum salsa this weekend that was delicious.

I'd love some of that!

Mmmmm... the salad you made and the one that inspired you look really, really yummy. Thanks Gawd I have my lunch in front of me or I would be drooling.

That looks fantastic! I've never tried farro before, in fact, I've never heard of it until now..you'll make a chef out of me yet!

Yum! And even though farro is expensive, I still think it's worth it :)

bermudaonion, me too! Plum salsa? YUM!

Cornflower, I'm sending some your way!

Staci, hehe! Farro is pretty trendy right now - it's good, and good for you.

Bybee, I'll send some your way, too!

Gentle Reader, I think so too! Whole Foods had a supply problem for awhile so when I came back on the shelves I stocked up!

I'll tell you a secret. You'd think I'd be a giant salad girl but nope. My 'salad' is lettuce, period. I don't like anything mixed into it. I don't like dressing. I like my grains cooked and hot. Whew. Now you know the real me. :<) I so admire the time you put into good food. Sadly, not many do. The reward is great, but few realize it. They'd rather eat donuts and big, big muffins.

fantastic! I think I will give this one a go!

My gosh that looks delicious. I have never heard of Farro so I shall have to keep on the look out for it

Nan, I definitely like a lettuce salad too, though with dressing! You are right, the reward is great for good food. I think there are many who don't enjoy cooking, or don't think they have the time to cook - though I'd argue that a person could make time!

J.Danger, let me know if you try it!

Pink Lady Bug, Farro is an Italian grain so you might find it in a health/whole foods store.

Isn't it fun to throw something like this together?!! I need to Google farro. It sounds like a delicious meal, although I'm not a big blue cheese fan so maybe I could substitute with feta. Yummy!!!

Les, this is one of my favorite sorts of dishes to make. Feta would be great here.

Mmmmm... anything with asparagus is good. By the way, I ran across a list of cookbooks that are up for an award and I thought of you. Here's the link:

Lisa, I love asparagus too. Thanks for the link! It's fun to see what cookbooks critics think are worthwhile.