Not My Usual Fare

Welcome to Books and Cooks, a blog about books, reading, and cooking along with whatever happens to be plaguing its author Tara at the moment. Geez, there is a lot of whining going on around here lately, and by the way when did Wednesday become the Day of Doom? Today I have a broken shoe (long story, but a pair of Clarks that I wear in the house every day every hour that I NEED) that I can hopefully replace at a minimum charge to me, a frozen cold water pipe to the upstairs bathroom where I am trying to raise the heat but it.is.not.responding.(the heat).and.i.am.getting.very.annoyed., and a driver's side door that won't open won't unlock manually or otherwise and is necessitating my Fourth trip to a car fixing place this winter when I have not needed a car fixing place more than say 3 or 4 times in the past 8 years. So if you sense a sarcastic tone coming from me today, now you know why. 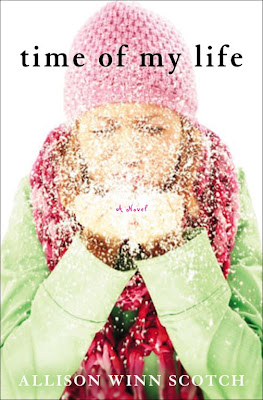 Yes, I see you are looking at the photo of that book, Time of My Life by Allison Winn Scotch and I hear what you're thinking - 'that doesn't look like something Tara generally reads' and yes, you are right about that. I read this book to discuss with my book club at our March meeting. I even remember voting for this book, it seemed like the best of three so-so choices at the time.

Time of My Life is the story of Jillian, one of those New York-to-New Jersey transplanted housewives who has a big house, drives a Range Rover, has a beautiful child and a husband Henry who works all the time. Jillian discovers that her old boyfriend Jackson, the guy she dated right before she met her husband is engaged, and suddenly Jillian finds herself transported back to the past to the time when she is living with Jackson and they are happy. Jillian is thrilled to have a second chance with Jackson, and uses her knowledge of the future to finesse her way through her relationship and her job. But...was Jillian meant to be with Jackson or does she have to give up too much??

What I liked about this book was the writing. Winn Scotch is a very good writer, she has a way with words that made me keep reading even when I wasn't crazy about the subject (more on that later). I flew through this book in about a day and appreciated how modern the book felt. I'll be interested to see what else this author publishes, if she sticks to the married-lit sort of genre or moves on.

I was troubled by a few things about this book. First, the author never sold me on the time-travel thing. Now, I am a person who wants to buy into your story - The Time Traveler's Wife - I believed. I felt the shift in time here was too abrupt, and that the book could have been set up differently either with Parts (1,2,3) or a Prologue and Epilogue bookending the main story, but in any case I never bought it. In addition, I really disliked Jillian, the main character. She is so thrilled to be back in the past! Her husband and child were such burdens and now she is free, and yes the word burden is used. Now, if I were to find myself time traveling without my child, I'm guessing I would be pretty hysterical to get back to her or at least put myself on the path to creating her. Jillian is not so much going in that direction, in fact it takes months before she really begins to express that she misses her child. I was beginning to hope that Jillian would lose both Jackson and Henry since I frankly didn't find much about her that was very likable.

I am definitely in the minority when it comes to this book. The reviews on amazon are almost all positive, across the board. I might have been a fan of this book too, five or ten years ago, but now I just think, eh.
Posted by Tara at 8:53 AM

I've read a lot of great reviews for this book, but haven't been compelled to read it. I think I'd feel like you do. You need to come down here - it's supposed to get up to 78 today.

Just to let you know that I think your blog is great and that I gave you an award:

First off, I am so sorry you are experiencing a day of doom. Things have a way of snowballing to become bigger "things" and then you just feel like crawling into bed and calling it a day. Which isn't a bad idea if you can do it but most have stuff to do or kids to take care of. LOL. Hang in there, tomorrow has got to be better!

As for the book. The cover always cathes my eye but it seems a little, shallow to me. Shallow is not the right word but basically the opposite of deep. I would go nuts without my kids and what you said about her not even really missing hers, well..that wouldn't sit well with me either.

Sorry this one didn't do it for you.

I completely agree with you about this book - I couldn't stand it and didn't even end up finishing it even though I only had about 50 pages to go until the end. I just couldn't put myself through it anymore and I really didn't care what happened in the end!
On another note - I can sympathise with your car problems. My drivers door won't unlock either at the moment so every time I get in my car I have to climb through the passenger door!

Wasn't there a Jane Austen time travel book recently? It seems that the success of the Time Traveler's Wife (which I thought was very good) has started a trend.

I am sorry, I hate days of doom.

It is okay to not like well reviewed books- I have been there before and I remember thinking, like did I read it wrong? For example- I love Toni Morrison- but I hated A Mercy. I kept trying to pick it back up and read it, but I couldn't do it. Everyone thought I was crazy. Oh well.

Hope your day gets better!

Tara, I read this one a while back. I don't finish books that I don't like, but I do remember being quite annoyed with the main character. Significantly, I finished it on November 18th (had to look it up) and really can't remember much about it. So, I guess I was kind of a "meh" too.

This could be the start of a regular bolg feature...The Wednesday Whine!! It was a tough day here, too, if it's any consolation.

Sorry about your Wednesday - I hope today is better. As for the book - it doesn't sound my kind of book either - thanks for the tip off.

bermudaonion, oh, I'd love to! It's been -3 here the last two mornings.

Diane, thank you so much! I needed that!

Ti, oh yes, I was begging my husband for a do-over! Would you believe after I posted my computer went down? Then I went to the mall about the shoes and was talking to a salesperson who I had in tears laughing as I told her about my day. The book - The opposite of deep is right. It's funny the reviews on amazon are along the lines of 'it looks like a light read but it's so not!'

Karen, let me know if you want to know what happened! It was annoying wasn't it! I wouldn't have read past the second chapter if it weren't for bookclub and the fact that it was a fast read. I'm sorry about your car door! Nuts!

Vintage Reading, yes I think there was, also a tv program.

J.Danger, thanks! I know what you mean - I'm sometimes left wondering what I missed! I'll be interested to see what the group thinks of this.

Kay, I don't think I'll remember much about this a few months down the road, either.

JoAnn, no kidding! But I hope not. Sorry you had a bad day too! Ugh.

What a rotten day! Hope the weekend is better. I really liked the book but I can see your point of view. There could have been a lot more depth to the book and the main character is annoying. If you take it just as a light read with some "what if" personal thoughts, it's good. It made me think about the "what ifs" in my life and whether I would change anything if it were possible to time travel.

Did you read her first novel? Department of Lost and Found. Its much different that Time of my Life.

Bree, thanks, it was. I can see what you mean about taking this as a light read...I guess I just don't read many books like that anymore, and the fact that the main storyline is about romance, well I guess I am just not that interested in a straight romance sort of book. I did not read her first novel - I see the reviews of it are very good.

Totally agree with your review. I wanted to like this one so much, but I never connected with the character and her reaction to the situation was hard to swallow.

Ali, thanks for your comment. I wanted to like it too, it seemed light and easy...then it wound up being annoying.

You (or, rather the author) lost me with names like Jillian, Henry and Jackson.

There are times when I like these type of "women" stories. I seem to be going through a phase with these types of books right now actually but I still expect characters that even though I may not like, at least make me think you know.

Iliana, definitely, I too like these light and frothy stories, provided they are well done. And I'm pretty over books that are a straight romance. I know what you mean.

whew! i really was starting to think something was wrong with me. i didn't like the book and was surprised to see great reviews for it.

like you, i couldn't suspend reality and believe the time travel ruse.

i don't even have kids and can't imagine doing what jillian did. i know she rationalized it...but still!

glad to see i wasn't alone.

Hi Booklineand sinker, thanks for stopping by. You are not alone, and there is nothing wrong with you. This book is just meh. I'll report back on what my bookclub thought.

Great review with a lot of insight. I think this is one book that I can pass on without regret!!

Staci, I think I can safely say you won't be missing much!