First Soup of the Season

I just noticed that I was nominated for for Best Cookbook Blog over at My Friend Amy's book blog awards. Wow! That is really lovely, thank you to those who nominated me. I was going to review The Likeness by Tana French today, and post this next week, but in honor of this nomination, and visitors who may be looking for a cooking blog, I will offer this instead.

Have I mentioned that it's freezing here? Yesterday the high here was 64 degrees, and since I had a refrigerator full of vegetables, and plans to return to the farmer's market 2 days later, I decided to make soup. I was inspired by all my vegetables, as well as the chapter on Soups I'd been reading in Deborah Madison's Vegetarian Cooking for Everyone. 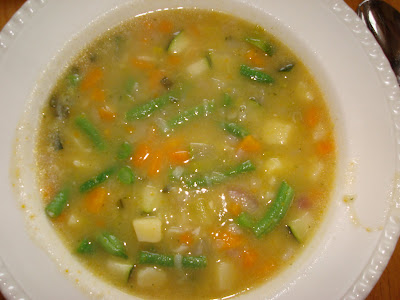 First, I made a stock for this soup using Madison's instructions. I sauteed onion, carrot, garlic, the greens of leeks, and potato peelings in a bit of oil, then added water, bay leaf, salt, and peppercorns and simmered around 1/2 hour. Madison states that water is fine to use instead of stock but I just felt like trying this. The flavor was unexpectedly wonderful!

I then began the soup by sauteing onion, carrots, garlic, a poblano pepper (seeded) and leeks in butter and olive oil, then adding diced potatoes and zucchini. When everything was tender, I pureed a few cups of the soup to add body and added it back in along with some green beans. I was pretty impressed with the flavor of this soup. I didn't even add herbs because I was too lazy to go outside, so the only seasonings were salt and pepper. I think leeks add something really special to soups and other dishes and plan to use more of them in my cooking.
Posted by Tara at 10:48 AM

Oh, this looks good. I do the same thing. The first hint of cooler weather makes me want to cook comfort food -- soups, chili, etc.

Your soup looks delicious - I love a good, hearty soup. Also, I cast my vote for you! I'll keep my fingers crossed.

That looks delicious! Lentil soup is a favorite in cooler weather. Alas, it's 103 this week. Bah.

Lisa, thanks, I am looking forward to cool weather foods too...only wishing summer lasted a little bit longer, since the cool weather around here lasts and lasts...

Bermudaonion, thank you very much! I was surprised when I read over the list!

Carrie K, thanks! I am also a huge fan of lentil soups and make huge pots of it and freeze it. 103 is bah! Ugh.

Congrats! I'm not surprised though you have a great blog. I wish I was a better cook.

Congrats on your nomination!

Yes, leeks certainly do add a certain something to soup but my own personal 'must add' for soups is celery. I never make soup these days without adding a couple of sticks.

Hi and congratulations! I'm busy visiting all of the nominees for the Book Blogger Appreciation Awards and trying to live up to my nomination by inviting everyone to participate in the Saturday Review of Books tomorrow and every Saturday at Semicolon. It's just a place I provide each week where book bloggers can leave a link to their book reviews for the week, and we can all find book reviews from other book bloggers.

I'm going to have to look for this veggie cookbook. I am clueless in the kitchen but I'd love to try out some soups. That can't be too hard right? haha.

That soup does look good, and as it has got suddenly cooler here too it sounds like just the thing.
Congratulations on your well-deserved nomination!

This looks really good. I think I'll leave out the carrots - I'm a little funny about them - Mr Monk must have something to say about carrots. :<) I'm a big leek fan, but mostly in potato and leek soup; this seems like that with a few additions. Lovely.

Congratulations on your nomination!!! Woo Hoo!

Chris, thank you, that's very kind of you to say.

Cath, thanks! You know, I'm not a big celery lover so I never seem to have it in the house..I really should keep it around though for things like this.

Sherry, Hi! Thank you for stopping by and for the kind invitation. I will be over to visit.

Iliana, thank you! This is a very all-inclusive cookbook. I think soup sounds harder than it is - it always did to me, until I started making it.

Karen, thank you, and the soup was the perfect thing for the weather.

Nan, thank you! I was thinking the same, that this was pretty much potato/leek which I also love.

Joy, thank you so much!

congrats on your nomination! :-)

Thank you, Natasha and Marie!