An Award and Some Peppers

Wow! I'm really , really touched by my win in the BBAW Best Cookbook Blog category. Thanks to whomever nominated and voted, it is so very kind of you. 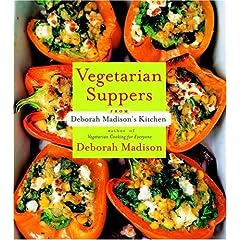 In the spirit of cookbooks, I thought I'd mention a recipe I made from this book, Vegetarian Suppers by Deborah Madison. I actually made that cover recipe, Yellow Peppers stuffed with quinoa, corn and feta cheese. I made some deletions and substitutions based on what I had in the house (monteray jack instead of feta, for example) and wound up with this (photo taken before they went into the oven) : 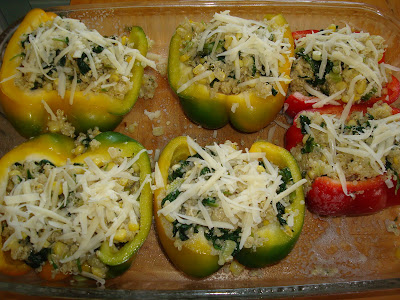 I thought they were very good. My husband liked the filling, not so much the idea of stuffed peppers. When pressed, he said if we were going to eat veg, he'd rather have the filling alongside black beans. I can see that. My daughter, quinoa lover that she is, was not super thrilled with all the additions, but wanted to eat the pepper.

Labels: Awards, Cookbooks, In the kitchen

I agree with your daughter. I love quinoa! These look great!

And congratulations on the award! We're having celebratory BBAW Chocolate Martinis over at Books 'N Border Collies if you'd like to join us! (Recipe included.)

I'm not surprised you won - I voted for you. I'm going to show my ignorance here and admit that I don't even know what quinoa is.

I've been reading your blog for quite some time now - well deserved award!!! Congratulations :)

Congratulations on the award Tara! So well deserved :)

I'm making a note of this book. My husband is a vegetarian and I'm a wannabe vegetarian :)

Oh, yum! I loved stuffed peppers, that filling is nice and jazzy.

Oh I want the recipe for those, they sound great! I have another one of Deborah Madison's books (Vegetarian Cooking for Everyone) -- she's fantastic. This is definitely going on my wish list!

Congrats on your award, by the way!

Oh, man, I have a recipe for stuffed peppers (ground beef and rice) that I love and a recipe for quinoa stew that I love... it sounds like they'd go great mooshed together.

Congrats!!! I totally voted for you. :D All of those pics from the farmer's market, plus the awesome dishes you make. :)

I'm not a huge fan of stuffed vegetables; I've yet to find a recipe that I think is worth the trouble, lol. But kudos to you for trying a vegetarian meal. ;) Betty Crocker has a slim vegetarian cookbook that's actually really helpful: easy-to-find ingredients, usually quick recipes, yummy food, and pretty pics.

Lezlie, yeah, another quinoa lover! Thank you and I sure enjoyed my (virtual) chocolate martini!

Bermudaonion, thank you so much. Quinoa is a grain - sort of considered a 'supergrain' because it has all the essential amino acids. When dry, it just looks like little pellets. You rinse it, then cook it in boiling water for 15 minutes, so it's super easy to cook. I make a pilaf sort of dish by adding olive oil, parmesean cheese, pine nuts and salt/pepper.

Wendy, thank you very much!

Carrie K, it is definitely jazzy! I wasn't a fan of the peppers my mom used to make...

avisannchild, I'll see if I can find a link for it..I have that book too, it's great. I also love The Savory Way, an earlier book of hers. Thank you!

Eva, thank you for your kind words. The Betty Crocker cookbook you mention sounds handy!ps. I voted for you too!

Bermudaonion, here's a link to a post I did about quinoa:

Congratulations on the win! I know your photos always make my mouth water and this one is no exception. Those peppers look delicious!

Congratulations on your win! I was hoping you would!

Literary Feline, thank you! (I was hoping you would win, too! Congrats!)

Bermudaonion, I buy it at wholefoods as well as my local store in the bulk bins. Try it! I also like it instead of rice with a stir fry.

I found the recipe online here! I'll have to adapt it a bit because I hate cilantro (did you use any?), but otherwise it sounds very yummy!

avisannschild, Thanks for the link! I did use cilantro because we all love it, but I'm sure it would be fine without it. I left the jalepenos out as I didn't have any and didn't feel like running out to the store. I also didn't do the onion thing on the bottom - felt a bit too fussy for the 3 of us.

Thanks for the info, Tara. I think we're going to try this recipe this week (we have a bunch of huge peppers in the fridge), so I'll let you know how it turns out!

avisannschild, do let me know how it is!

This was delicious! I didn't actually make it (my partner and a friend did), but they pretty much followed the recipe to the letter, except the cilantro was replaced by parsley and for half the peppers they substituted roasted pumpkin seeds for the feta (the friend is vegan). I tried both and they were SO good (although the feta one was my favourite). Thanks again for drawing my attention to this recipe and this cookbook! (It's definitely going on my wish list!)

Avisannschild, I'm so glad you liked them! I love the idea of adding roasted pumpkins seeds - yum! I think this is a good cookbook. I think I must have similar taste to Deborah Madison because all her food sounds good to me. This book has great photography and recipes that seem do-able and not fussy.