How about a review - or two?

I'm still catching up on my reviews for books I've finished in the past weeks which is actually a good feeling, knowing I have some in 'the bank'. 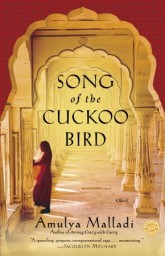 Song of the Cuckoo Bird is the second novel by Amulya Malladi I've read this year. I chose Song because it is described as a 'sweeping epic', 'an intergenerational saga' - descriptions like these rarely fail to pull me in. This is the story of an ashram, Tella Meda, located in India, full of people who are there because they really have no other place to go. Men and women, young and old, widowed, and unmarried, they live and grow up together in this separate world. The book covers the period from 1960 to 2000 and each chapter is proceeded by a few sentences about the political and social situation in India at the time. At times the residents of Tella Meda are affected by and discuss these events, but in many cases we see how their insular existence keeps them a world apart.

I had a bit of trouble at the beginning of the novel, and thought I might even put it aside. The first several chapters felt somewhat like short stories to me, with several consistent characters, each one bringing in a new person whose history is explained. At the end of several of these chapters, a statement would often be made - that they never saw this person again. I was just at a loss each time these chapters ended. Why introduce a character only to pull him or her away again, which did not propel the story forward? I persevered and was rewarded as Malladi found her pace and told a tale of lives intersecting in various ways, and how family does not always mean being related by blood. Ultimately, I found this to be a satisfying read.

I read a few fascinating reviews for Little Face by Sophie Hannah written by the British Book Bloggers, so I was excited to find a copy at bookcloseouts. The premise of Little Face is horrifying; Alice Fancourt leaves her two week old daughter at home with her husband David at her mother-in-law's insistence. When she returns she insists that the baby in her daughter's crib is a stranger, that her baby has been swapped. A police investigation ensues and David's behavior and attitude toward Alice become that of a madman. This is heavy psychological stuff, horrifying for a parent or a spouse who is being treated as though it is she who has gone mad. This book is not for the faint of heart, and the descriptions of David's treatment of Alice will offend some readers. I found this to be compelling reading but was put off at first by the twist at the end. I was really bothered by this and felt as a reader I'd been led astray. I went back and re-read some passages and found that the truth had always been there - just not in an obvious way. What Hannah achieved was really extraordinarily clever, writing with her endpoint in mind, and being able to convince me of one thing while she was really saying another. I'm looking forward to reading more of Hannah's work. I obtained a copy of her second thriller, Hurting Distance, and am looking forward to the ride.
Posted by Tara at 9:18 AM

Wow! Little Face sounds scary. I wouldn't have wanted to read that when my son was young. I'm going to go check out bookcloseouts now.

I read an excerpt of (what I now realize is) Little Face. It has haunted me ever since, but I couldn't for the life of me remember. Now I can get it and put an end to the wondering.

I think that LITTLE FACE sounds intriguing. I see that our library has a copy and I'm going to put it on hold soon. Thanks for 2 good reviews, Tara!

Thanks for the reviews, Tara. Both of these sound good, but I'm really interested in Little Face. I can't think of many things more terrible than believing that your child has been abducted and then no one believing you.

Little Face sounds a bit intimidating but it's so different from what I normally read that it also sounds very interesting. I am going to add it to my TBR pile.

First of all, I wanted to point you all towards Dovegreyreader's review of Little Face, I think this is where I first heard about it:

Bermudaonion, it absolutely is! The premise is pretty horrifying.

J. Daner, you are welcome! Now you can finally find out what happens.

Kay, Nice that your libray has a copy- mine doesn't have any of her books. Thank you!


Lisa, I had been thinking about this book ever since I read the review above. What Alice goes through is horrible.

Ti, I'm glad you think it sounds interesting despite being out of your comfort zone. Since I've begun reading blogs I've found so many books and authors I would never have known about otherwise.

I know a lot of people have loved Hurting Distance but I didn't really like it. Something was just off... Kind of like what you said about Little Face. Hmm, I'd definitely give this author another try though so I'll keep Little Face on the list but probably won't be rushing out to get it.
I like the sound of the Malladi book though although as I'm reading quite an epic on India (Toss of a Lemon) right now I may not be up for this for a while.