Welcome to my first post of 2008! I realized I haven't done a post on new book acquisitions in a while and I have a few things to share.

Here are the books I received as gifts: 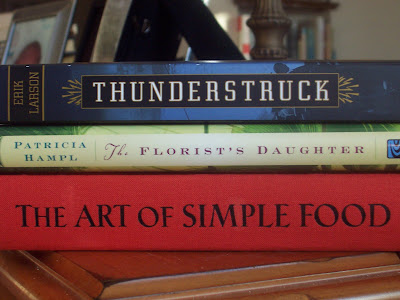 Thunderstruck and The Art of Simple Food were from my husband and I think he made terrific choices. Thunderstruck is by Erik Larson, author of Devil in the White City - which I loved (and my husband devoured last week). The Art of Simple Food is going to be a great read and a great resource. It is written by Alice Waters founder of Chez Panisse and seems to be more of her own work than her other books (which have generally been co written according to what I've read). The third book, The Florist's Daughter is a memoir by a local woman and was given to me by my in-laws. I am really looking forward to it. Not pictured is a giftcard to Borders (yeah!) which I've already begun using by ordering Michael Pollan's new book.

Half Price Books had a big sale and here's what I picked up - I shopped two different locations: 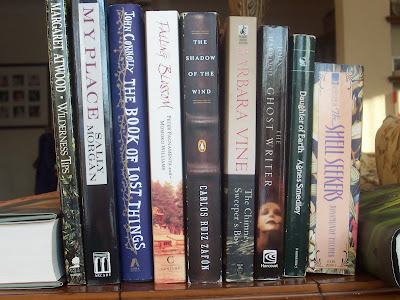 From left to right:

Wilderness Tips by Margaret Atwood - I love her writing and thought I should try her short stories.

My Place by Sally Morgan - An autobiography of an Australian Aborigine - I've been interested in this topic since I read Bryson's book on Australia.

The Book of Lost Things by John Connolly - There are so many great blog reviews of this.

Falling Blossom by Peter Pagnamenta and Momoko Williams - Published in the US as Sword and Blossom, this is a love story between a British officer and a Japanese woman.

The Shadow of the Wind by Carlos Ruiz Zafon - A book I always think I ought to read.

Daughter of Earth by Agnes Smedley - A Virago Modern Classic and my bargain purchase at only 80 cents.

The Shell Seekers by Rosamunde Pilcher - An old love of mine, this has the same floral cover my copy had and doesn't look as though it's been read. I had wanted to replace this book, but was not crazy about the new cover.

Whew! What a way to start the year.

I have also been spending time lately watching a few films. I have been enjoying the Up Series, starting with Seven Up. This series began following British children in 1964 and checks in with them every 7 years. It's just a fascinating social document and I look forward to watching the rest of the series ( the most recent is 49 Up, released in 2005).

I have also had the great pleasure of watching Cranford. How you might ask? Ah, the power of Y** T*b*. My girlfriend from work and I have been delighting over the series and we agree that it is one of our favorite 'period' productions and would love to own it and watch it over and over.
Posted by Tara at 8:42 AM

Quite a stack of books there! I'm awaiting my own little stack from Amazon... I've heard lots of good things about The Book of Lost Things on blogs as well. I might just have to check it out myself.

Those were some great finds! I'm a little jealous. :) Hope you have a healthy and happy new year.

I requested a review copy of "Artisan Bread in Five Minutes a Day" after reading about it on your blog, and it showed up yesterday. I look forward to reviewing it and letting you know how the bread came out!

Both Tom and I LOVE the Up series. Great, great, great. And we think about these people in the years between the movies. What an amazing undertaking. And it will go on until Apted dies; but even then I wonder if someone might take it over until the people quit or die. This is the only "reality" movie or tv show I watch, and I think it is truly one of a kind.

What fun to get books as gifts - I only got one but it was one I had! I guess a bookstore trip is in order so I can exchange it :)
I loved Shadow of the Wind. I think you'll be in for quite a treat.

Matt, it seems The Book of Lost Things is just one of those books that just show up everywhere - not unlike The Book Thief and the Maisie Dobbs series.

Lisa, I was pretty excited to find these - I went with a list this time and came out pretty well. Happy New Year to you!

Heather, I was hoping you would review this! I look forward to the outcome - I need to get a baking stone and it seems Williams Sonoma is out around here.

Nan, Isn't is amazing! I've watched through 21 up now and just keep thinking about the people and look forward to learning their stories.

Iliana, my husband rarely buys me books for that very reason. He knows now to stick to new releases in most cases. He even asked me recently how I have everything sorted so he could figure out if I owned Thunderstruck!

What fun books. You will have a great time.

I'm intrigued by the TV series. I'll have to look for it on Netflix.

Great choices. I have The Book of Lost Things on my tbr list. Needless to say, but Seven Up is a fantastic series - amazing to see the changes in people's lives.

Lots of great books! I really enjoyed Falling Blossom last year and have slowly been working on Wilderness Tips. You have some good reads in store! I'd also like to watch that 7 Up series some time, and eventually Cranford. My computer is way too slow for YouTube, though. Enjoy your new books!

Shadow of the Wind was a good read.

Ghost Writer was *so* good. :) I got The Book of Lost Things as well, and I can't wait to read it! I wish we had Half Price Bookstores around here. Oh well-we have a good independent used bookstore at least!

I too have been looking at The Book of Lost Things as something to pick up in 2008. And it never had occurred to me to go to that-site-that-shall-not-be-named in order to see Cranford. What a clever woman you are, Tara!

Kay, I think so too! Netflix is where I've been able to find the films and our library also has them.

Booksplease, I find Seven Up so fascinating - though it is a little odd to watch the films in a row, it's seems as though they've grown up so fast. I will be tuning in to future installments.

Danielle, I remember your review of Falling Blossom as well as one of the stories from Wilderness Tips. Too about about your slow connection =( but hopefully Cranford will come to the US soon. Perhaps we should email Masterpiece Theater.

Jill, I hope you will let me know what you think of Cranford! My girlfriend and I thought we might find it there after watching the recent BBC remake of A Room With a View there.

The Ghost Writer is excellent. You made out quite well!