Well, it looks like I really struck gold by mentioning 84, Charing Cross Road! Thanks so much to everyone for mentioning how much they enjoyed it and for suggesting additional reading and watching. I picked up Hanff's sequel, The Duchess of Bloomsbury Street from the library today and will hopefully report back on it soon.
*****
I helped set up the Scholastic Book Fair yesterday at my daughter's elementary school - I was surprised by how much fun it was! I got to live out my fantasy of working in a bookstore for a little while - unpacking boxes, setting up displays, figuring out where books should go - what fun!

*****
I've been tagged for a fun meme by Lisamm at Books on the Brain. Here are the directions:

Open up the book you’re currently reading to page 161 and read the sixth sentence on the page, then think of 5 bloggers to tag.

I currently doing some light reading (The Island by Victoria Hislop), and the sixth sentence on page 161 is:

Levels of starvation in Crete were, by now, reaching such high levels that it was not unheard of for local people to accept what was know as the 'Deutsche drachma' for a tip-off about the whereabouts of resistance fighters.

Well. That doesn't sound very light, does it? If you would like to do this please do, and let me know. I love knowing what people are reading.

*****
Today I baked Nigella's Fresh Gingerbread with Lemon Icing from How to be a Domestic Goddess. 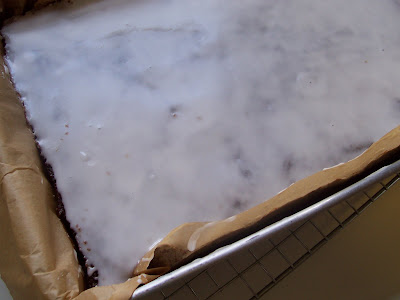 I have made this recipe several times and it's always been successful and received rave reviews. The only change I've made is in the icing.....when I've mixed it as directed it's been more of a glaze and there has not been enough. I generally sift a pile of confectioner's sugar (1 1/2 to 2 cups) then add most of the juice of a lemon - stir in warm water until you have a thick, white spreadable paste (it resembles glue).

I love making gingerbread in the fall but it makes so much that I like to make it for a crowd - that's where tonight's bookclub meeting comes in handy. Are there any recipes you look forward to making each fall (or any other season for that matter)? I'm thinking of recipes that are not generally repeated often, just made year after year.
Posted by Tara at 1:28 PM

Tara, glad you enjoyed the book fair set-up. I truly loved helping with my daughter's school book fair (was it really 15+ years ago?).

I do have several things that I only make at this time of year. Christmas-type recipes. A cheese ball. Gingerbread cookies. My husband's cornbread dressing for the turkey. Hope we'll have time for those this year.

Just wanted to tell you that I did the meme on my blog and and a couple people did theirs in my comments, and another person was going to put it on her blog. So there are four people's current books you may read about. :<)

Just recently returned from a mini-break and have much to read here! I would be interested in a list of your favourite Nigella books - from favourite to least favourite. I have been perusing them over at TBD and just don't know which to start with.

Also, my sister mentioned the Charing Cross book a while ago and she said how much she enjoyed it. I investigated it at the time but obviously didn't follow through with a purchase - I will be sure to rectify that this time!

Check out this site for Video Book Reviews

Tara, I'm just about to put my answer on my blog as well.

Kay, ooh, cornbread dressing - yum! I've tried a version of this and did not have success.

Nan, thank you for passing it on! I will check the responses.

Nutmeg, I am sure you would love 84, Charing Cross Road. I am going to think about my Nigella list and post it (hopefully) later today.

Booksplease, oh good, I will go take a peek!


Just thought I'd contribute mine here! It's The Closed Door and Other Stories by Dorothy Whipple.

That gingerbread looks yummy! I was in the mood for it and bought a store bought mix and it was not very good. I was the only one at home who ate it, and then had to throw most of it out! :( I'll have to try this recipe. I take it you are a Nigella fan?

Danielle, if you like gingerbread this is a good one! My husband won't eat it which is why I made it for bookclub. It's so moist that it keeps well and improves with age. I am a big Nigella fan!

hey i read your blog is interesting especially for your cooking....