Those Who Save Us

I'm freezing! Brrr. I feel bound and determined NOT to turn on the heat in September, however at the moment my bedroom is a brisk 62 degrees. We'll have to see how I feel when I arrive home from work at midnight.

My bookclub has had its fair share of duds this year. At our next meeting we'll be discussing Jenna Blum's Those Who Save Us

. Here was something I could finally sink my teeth into. 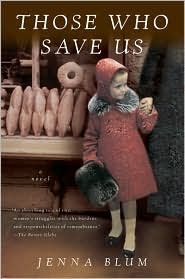 Those Who Save Us is the story of Trudy and Anna. Anna is Trudy's mother, a German immigrant who was never really accepted in the small town of Minnesota where she lived. Trudy is her daughter, a professor of German studies, who has lived her life wondering why her mother won't talk to her about her father and her past. Thanks to a photograph she found with her mother's things, Trudy believes she is the child of a Nazi officer.

Told in alternating story lines, we learn Anna's past and Trudy's present. I think I enjoyed Anna's storyline more, desperate as it was. Anna's story feels unexpected and it is no wonder that she has chosen to remain silent. Though free during WW2, she suffered and paid a price for survival. Trudy embarks on a video project with a colleague who is recording stories of Jewish survivors. Trudy in turn begins recording stories of Germans who lived through the war. The tales she hears vacillate from greatly disturbing to life affirming. The ending comes as a bit of a shock, we know that Trudy will eventually discover what her mother went through, and the end is positively gripping as things are revealed.

As I mentioned above, this story takes place in Minnesota. When I read a book set in a place where I live or have lived, I never fail to wonder if because I am familiar with the place, the details of place stand out so much to me. I cannot tell from Blum's biography if she has ever lived here, but I can tell you that she has the details spot-on. When she writes about the cold, and how it seems your lungs are going to shatter when you breath in, well, I know she knows how cold it really is here.

This was an absorbing read for me and one of the highlights of our bookclub in 2009. I can't wait to hear what everyone else thought.
Posted by Tara at 10:31 AM

Wow, what a story! I'm adding this book to my wish list. Thanks for the review.

I just added Those Who Save Us to my wish list and noticed that my last entry, Mudbound, came from you too!

Don't you hate when your book club picks a bunch of duds? It almost feels like a neverending cycle. I'm so glad this one broke the cycle for you.

I love the cover! I am on a bit of a break from serious reads, but when I come back from that, I'm definitely putting this on my list.

We haven't turned on our heater yet. Hubby says we are going to try and hold out for Thanksgiving but I have my doubts about that...

THanks for the great review. I have this one somewhere on my shelves.

Fabulous review. I have had this one on my shelf for a while (still unread); thanks for inspiring me :0

Glad to hear good things about this one as I have it on my pile as well! :)

I am also trying to resist turning on the heat! It is too early. :(

And I am really glad to see you talk about this book - I just got a copy from a friend of mine and wondered if I should start it right away. I'll be interested in hearing what your bookclub thought of it!

I'm sending you some of our heat, Tara. Today we are supposed to reach 92. Gah.

This book sounds good and I really like the alternating story lines aspect.

Ti, I mean we vote, but you never know...also I'm often disappointed in many of the books suggested.

Jenny, I do too! I know what you mean about taking a break...I've been doing lots of comfort reading lately.

Melissa, Thanksgiving! I have to check and see where you are.

Staci, We've been together for...9 years I think? That's pretty amazing.

Danielle, everyone seems to have a copy of this! Hope you like it.

Melanie, I thought so too! I'll let you know after we meet next week.

This sounds like a great book! Thanks for the review. I'm adding it to my wish list.

Hope you've turned up the heat now that it's October!

I'll have to recommend this to my f2f book club. It sounds wonderful and I'll bet it generates a great discussion. Thanks, Tara.

avisannschild, I didn't make it! I turned the heat on Sept 30!

Les, we did have a good discussion about this one.

Our book club loved this book. While I was reading it I forgot this was fiction. I felt so real to me. We were also very lucky at the time the author was a unknown author and we had gotten to speak to her. It was a great book club meeting for all.

We had lots of duds this year too. Luckily last month I picked one of Jodi Picoult, Change of Heart. It is not the writting but the discussion that comes from the books.

Hi Carolina Gal! Wow, you are lucky to have gotten to talk to the author! I also felt that this could have been a true story. I agree with you about what makes a good book club book. Sometimes we all like it, but have nothing to talk about. In this case, there was plenty to talk about.

I've been wanting to read this one for a while. Glad to hear you liked it. Would it be okay to link to your review on War Through the Generations?

I read this one when it first came out and remember liking it. I do not recall its setting which makes think I should reread it!

I note she has not released anything since this book ... which is a shame.