It's not very often take I take note of a book, pick it up at the bookstore, and read it a week later. I generally like to hem and haw a bit but occasionally, the stars align and I actually buy the right book at the right moment and just get on with it.

That book was Mudbound 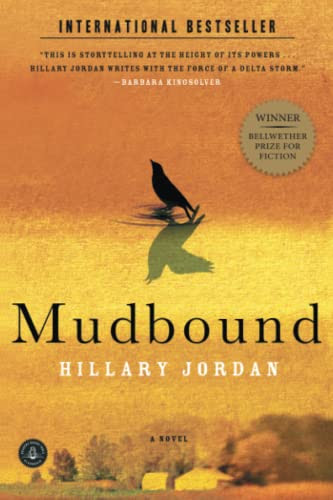 Mudbound takes place in Mississippi just after WW2. The McAllens, a white family, have just bought a farm out in the country where the black Jackson family live as sharecroppers. The Jackson's eldest son Ronsel has just arrived from serving his country in Europe where he experienced for the first time in his life what it was to be just a man, not a black man. It's hard to imagine what it would be like to come home after that and adjust to life as a second class citizen - we have that chance here. Ronsel begins what seems to everyone else like an unlikely relationship with Jamie McAllen, brother of farm-owner Henry. These men understand one another like no one else around can as they've both just returned from war.

Because Jordan has chosen to give us first person accounts from a variety of characters, we know that Henry's wife Laura is less than thrilled with her new life in the country. We know how Ronsel's parents feel about the McAllens and their life on the farm. What is striking about the characters in Mudbound is that Jordan has not made them any better than they are. The McAllens are just as racist as you'd expect a family at this time period to be. They've been brought up to believe that black people are..different. The elder Jackson's have learned how to live in this world, showing subservience when it eases the struggle.

As I came to expect, a great drama unfolded in the latter part of Mudbound. What came to be was so shocking and beyond reality that as I read the words my eyes shut, I said out loud 'Oh my God' and closed the book.

Mudbound is not a perfect book, but it is absolutely spellbinding. It's the sort of book you begin to read and suddenly you've read 100 pages and the next thing you know you've finished. It's the sort of book that creates an atmosphere from which it's difficult to surface. It's astonishing really, to read something like this from a first time novelist. Hillary Jordan is an author to watch.
Posted by Tara at 10:57 AM

I've had this on my list, but reading your review, I think I'll have to stop at the library today and get it. Sounds wonderful! If I can deal with the setting - I have a hard time reading books like this sometimes. (Holocaust books the same - I get all nauseated.) But it sounds so good I must give it a go.

You had me at the 'oh my God' moment. I love to be shocked by a book. So often I see what's coming that it's nice to be surprised sometimes.

I haven't read Mudbound myself (yet) but I have tried to get my library book club to choose it as one of our selections, to no avail. The paperback cover art is much more appealing than the hardcover - perhaps I'll try again with that version. :)

"an atmosphere from which it's difficult to surface"

I think that's a perfect way of putting it. I was completely sucked in by the power of the writing from the very first paragraph, with the huge storm rolling in and them trying to dig the grave before it breaks.... it's giving me shivers just thinking about it.

Tara.....LOVED your review on Mudbound. I just acquired that book recently, so I'll be looking forward to it.

BTW: thanks for the tip on tracking who referred what book to you :)

Jennysbooks, I hope you like it. It is a very upsetting book, to be honest.

Ti, It was a shocking moment for me, and not at all what I was expecting.

Lesley, it's hard to believe you couldn't talk them into it! It's excellent, and a quick read too. I agree with you about the cover art, I never noticed the hardcover of this! Perhaps they'll have forgotten about it! Give it a go.

Fyrefly, I was also drawn into this amazing book right away. Thanks for your comment.

Diane, thank you! I hope that you like this.

I'm the same way when I get books, sometimes even though I'm so excited, somehow they end up sitting on my shelf for a while. How funny is that.

Loved your review of Mudbound. I remember seeing this one when it first came out and it's been on my list since then.

I love this sort of book--the kind you just can't put down! I'll add this one to my list.

Oh goody - I have this one in the tbr pile already!

Oh, wow. I've heard great things about this book but your review has convinced me. I need to nominate this for my book club's selection for November. We loved Kathryn Stockett's The Help and this sounds like another winner. Great review!!

Iliana, isn't that funny, that we need books Right Now and then they just sit?

Danielle, books like these don't come along every day, that's for sure.

Samantha, I hope you enjoy this. I think you will!

Les, oh good. I think this would be a great book club selection. Perhaps I should suggest it myself, though I'm already planning on suggesting The Help.

My book club LOVED The Help. We had a fabulous discussion. You can't go wrong with that recommendation.

Les, that's great to hear. We each suggest three books and then vote for one of those. I think I'll be crossing my fingers for this.