Well, I didn't expect to be gone so long from here. Except for my rant last week I haven't posted in a while. I had so much to do last Wednesday and Thursday since I had to work the weekend and all my plans were derailed thanks to the car issues and snowstorm on Thursday. Whew. And now my back hurts in a scary way, in that 'if I move the wrong way' way I'll be laying flat on the floor for the next week. Yep. I do have a lot of complaints. Anyway. 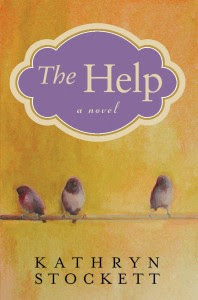 What I wanted to share last week was a book that I found really excellent. So good, in fact that I'm bordering on using the 'L' word, which I don't often do. So good, that the day after I finished it, I saw it sitting on my nightstand and wished I was still reading it. That book is The Help by Kathryn Stockett and is, amazingly, her first novel.

Imagine Jackson, Mississippi in 1962. There are hippies in California, but here the Junior League ladies reign supreme. All the ladies in town have maids, black maids, who work for minimum wage and do everything around the house including raise the children. Their thanks for this is their meager salary, a 'special' toilet that the family does not use, and possibly an invitation to family weddings where they are expected to show up in uniform. And if your mistress is unhappy with you, why, she can fabricate some story and have you locked up before you can say 'not guilty'. Jackson, Mississippi was not a good place to be in 1962 if you were not white.

The Help is the story of three women, Skeeter, Minny, and Aibileen. Skeeter has just returned from college with dreams of moving to New York and working in the publishing business. Minny and Aibileen have worked as maids since they were young. Skeeter runs an idea by an editor of a New York publishing house - what if I were to interview maids here in Jackson and write about it - is there a market for that? And thus begins the relationship between Skeeter, Minny and Aibleen, all three with a common goal, that of creating a book containing the stories of their lives. Each has her own reluctances to become involved with the project, each one is tormented by what could happen to her if she is found out.

The Help is a rich story and one that gives such insight to this period of time. Full of love, hope, fear and sorrow, family obligation and social expectations, I felt as though I saw inside these women's lives and hearts. I sure hope Kathryn Stockett has more to say, because I'll be first in line when she publishes another novel. The Help is highly recommended.
Posted by Tara at 12:52 PM

I am so looking forward to reading this one.

This one sounds good. I can't wait to read it but I have to catch-up on so many other reads that it will be awhile before I get to it.

I'm laughing over my word verification word "glyinda" sort of like Glinda the good witch.

Tara, I'm so glad that you liked this one as much as I did. It was a great book, especially for a debut novel. I hope the word spreads and many, many people pick this one up.

bermudaonion, it's definitely worth a read!

Ti, I know what you mean! And those word verifications crack me up!

Kay, I agree, I agree. I hope I see it on the bestseller list soon.

I've been seeing this one around the blogosphere and I'm definitely putting it on my list. Sounds like a great story. The cover is quite pretty too :)

Oh and hope your back is ok, Tara!

I loved this one too!

I heard an interview with the author on the radio the other day that got me interested in this one. It does sound like a good one and I'm so glad you enjoyed it.

First I've seen of this one, so one more to add to my list to read one day! Thanks for the review.

Iliana, I haven't seen any bad reviews around of it! I also like the cover. About my back, thanks, I think it's feeling a little bit better today. I'm trying not to bend over or sit too long.

Literary Feline, cool! I should seek that out, or else some print interviews. The afterword of the book was really interesting.

Ali, really! I'm glad it sounds good to you.

I hope you're back is feeling better!

As for the book, I have not seen a reviewer yet who hasn't liked it. I'm looking forward to reading it at some point.

Anna, thanks - it's actually doing much better today. It's just amazing to see so many good reviews for this book - and not any negative ones.

Between you and Kay writing such rave reviews for this book, I'm really intrigued and anxious to get to my copy. I think it will be next after Revolutionary Road and The School of Essential Ingredients. Thanks for an enticing review!

Les, Judging by what I've seen that you've liked, I bet you'll enjoy this one. The School of Essential Ingredients is a really wonderful book too!

Great review! I have heard nothing but good things about this one!