A few people I work with suggested that I might enjoy the TV program, Lost. That was either a really good idea or a really bad idea. Because I am absolutely hooked! If I could, I would hole up for the next week at this computer and watch every last episode. Alas, that is not possible, but it is certainly cutting into my reading time, I must say. Any fans out there?

I should tell you about a few books that I've read. 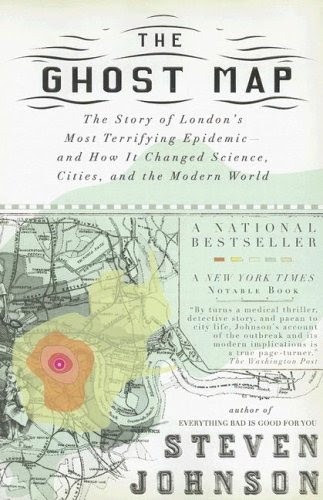 First off, is The Ghost Map by Steven Johnson. Now, how to convince you to read a book that at its most basic is about...excrement. The Ghost Map is a nonfiction book that explores the cholera epidemic in London in 1854. It's a bit of a who-done-it or actually a how-done-it, as the author traces the footsteps of the men who discovered what was the ultimate cause of the epidemic and how this discovery affected the future of London and really, all major cities around the world. This is one of those nonfiction books that reads like the best novel and is full of all sorts of interesting facts about topics you perhaps never thought about. For example, what might explain the fact that there is a disproportionate rate of alcoholism in Native American and Aboriginal people? The author suggests that this may be due to the fact that most other people on earth were forced through a 'genetic bottleneck' in which the genes for tolerating alcohol became dominant, due to the fact that drinking alcohol was safer than drinking water years ago. This is fascinating stuff! This is a great read for those who are interested in medicine or the history of medicine, the history of cities, the history of Victorian London and the future of cities on our planet.

Nuts - that's all I have time for, I'm off to ready myself for work.

I hope to post my favorite books of the year tomorrow, if my girl allows me the time.
Posted by Tara at 4:06 PM

You don't have to sell me. The book sounds fascinating!

I agree with Ti, the book does sound fascinating.

I love, love, love LOST! I'm actually going through withdrawls because the new season isn't here yet(I think it's in a couple weeks, though). How far have you watched?

Go ahead an hibernate and watch...:)

"Lost" Love it, love it. It's very addictive. Have you started discussing theories with your fellow co-workers yet? If not, just wait.

Try to watch all of the seasons of Lost before the new season starts in a few weeks. My son & I love the show. Around the 3rd season it kinda gets off track but last season was really good:)

I have never in my life watched an episode of Lost! but my good friend Heather is ADDICTED!

LOST is a great show. I can't wait for the new season to start up.

The Ghost Map is one I've been wanting to read for some time now. I am glad to hear you enjoyed it! Thanks for the great review.

My husband and I just started watching Lost this year and caught up to season 3. We have to watch season 4 yet. It is addictive...such a great show!!

I saw this book reviewed in Time Magazine a while back and clipped it for my wishlist notebook.

Bermudaonion, it really was, it's a great read.

Robin, yeah! I've only watched the pilot and the next four episodes so I have a lot to look forward to. I'm really curious as to what Kate did!

Bree, I haven't watched enough to discuss yet, but I'm already asking around - do you watch Lost? Hehe.

Melanie, I will, I don't think I'll be caught up in time.

J.Danger, I don't blame her!

Literary Feline, it's good to know there are so many fans! I'm glad you enjoyed the review.

Red lady-Bonnie, there are so many episodes to watch, aren't there?? Kudos to ABC for putting it online.

Bybee, I bet you'd like it. Happy Book Year to you, too!

This sounds great. And the Band Played On did this same sort of thing for the AIDS epidemic, and it's one of those books I can never put down once I've started reading it. I will definitely be getting this one from the library!

Another Lostie here - can't wait for the new season to start on the 21st!

I too read this one this year and thought it fascinating.

My word verification is "gones"! A bit like Lost you think?

jennysbooks, I haven't read it (I should!), but, yes I can see that it is similar! I bet you'll like this then.

Carrie, I'm going to have to avoid spoiler, since I don't think I'll be ready for it yet!

We are huge, huge, huge fans! In fact I've been saying this month is great for two reasons: Mr Obama and LOST!

Nan, yeah for both! I don't think I'll be ready for Lost though, I've too much to catch up on!

Just found your great blog. It seems like there are many bibliophiles who also love Lost. Be careful.... it'll soon take over your entire life and then you'll be done with all the past seasons and anxiously waiting with the rest of us addicts!

Tasses, I wonder why that is?? Perhaps the mystery involved? My daughter just told me it is annoying her that I keep watching it!