We are having Too.Much.Drama. around here. 3:30 Sunday morning found me rushing to the emergency room with a child who fell out of bed and had an enormous lump on her head. Since then we've watched the eye become swollen shut and a huge hematoma migrate to the area around her eye leaving her with a whopper of a shiner. We've also been carefully monitoring her vision and nausea for other unseen injury. This has wiped me out. As a parent, having a sick or injured child is terrifying.

I have more drama (and not the good kind) coming later this week, though this will be planned and will take me away from blogland for several days.

Despite the cold weather at the farmer's market this weekend, everyone was very upbeat. There are still plenty of vegetables available and the meat vendors could actually put their stock on the tables for browsing thanks to the freezing temperatures. This caused me to stock up on meat for the deep freeze. Some of it had just been packaged the night before. 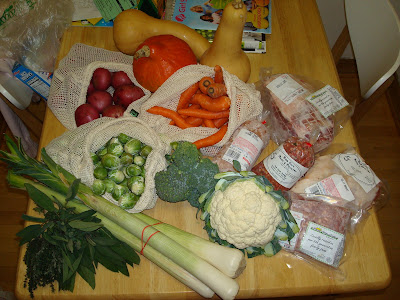 I hope next week goes better for you!

Your farmers' market looks so good. We were in lower Alabama last weekend and bought some vine-ripened tomatoes - the last of the season - and they are oh, so good!

I do so remember the agony of having a sick child - now mine are grown up I still worry, but ever so slightly less, but I really felt for you reading your post. And I hope the rest of your week goes well.

Your farmers' market pictures have been a joy, I wish we had something as good locally.

Beautiful haul from the market. Everything looks delicious. I hope the drama subsides soon. I can only imagine the kiddo emergency was terrifying!

I think one of the scariest places for an injury is the eye area. My little guy has a scar across the top of his eyelid from falling down the stairs and hitting the kickboard with his face. It was terrible and we were sad until it healed. But it all turned out okay as I'm sure it will in your case. These kids are quite resilient.

Tara, what a hard week you've had! Hope your little one is better soon. I know those times are scary. Take good care of yourself and her!! Big hugs!

Oh man Tara! I hope your wee one heals up quickly. Poor thing.

I hate when the kids get hurt or sick! I know exactly how you feel as my daughter fell while holding a straw and she managed to fall right on it. It made a small cut on the inside of her eye but missed the eyeball completely. ACK!

I hope she gets better fast! Hospital visits are never fun!

Sorry to hear this ... I can imagine how scary this was. And, like others said, it is certainly draining and exhausting when the little ones are sick or injured. I hope she is doing better (or will be soon) and that you are OK too. Hang in there ...

I'm so sorry to hear about your daughter's accident. I know how scary that is, being a veteran of several emergency room visits. I hope she's better, and good luck with any other drama, planned or otherwise :)

Oh no! I'm glad you are all home and recovering. It is so scary when the kiddos get injured - and I can't help but think about parents whose children need multiple surgeries - how stressful. Hope you are resting.

Everyone - all your kind words are much appreciated!

bermudaonion, those tomatoes must have been amazing! I bought some at the store recently - yuck!

GeraniumCat, I don't think you ever stop worrying, do you? Thanks for your comments.

Andi, thanks, and yes it was!

Kristen M, ooh, that sounds just terrible. I knew that head injuries in kids look much worse then they are, but it's still shocking.

Kay, thank you very much.

Ti, ouch! That sounds so painful and scary.

Maw books, thank you, and no they're not.

Betty and Boo's Mommy, thank you!

Gentle reader, this was our first time with her, which is pretty amazing considering how active she is. thank you!

Melanie, thank you for your thoughts.

How very scary! I'm glad she's on the mend, but it is so awful when anything happens like this. We've sure had our share of those emergency room visits. I'm concerned about your planned drama coming up. Hope everything is alright, Tara.