Reviews of the Week

When I read Tana French's first book, In the Woods, not long along ago, I was quite intrigued by the 'teaser' chapter at the end for her new book, The Likeness.

The Likeness focuses on detective Cassie Maddox, who has been moved from the murder investigation team after the debacle that occurs in In the Woods. Cassie, however, is called to the scene of a murder by Frank, her old boss when she worked as an undercover detective. When Cassie arrives at the scene, there is a dead woman who is a dead ringer for Cassie. Not only that, but the woman is identified as Lexie Madison - a name Cassie has used in the past as an alias when she was undercover. Intriguing, no? Frank's idea is to cover up the fact that Lexie has been murdered and send Cassie in to live as Lexie undercover, hoping the the murderer would reveal him or herself. This was the best part of the book, in my opinion. Between Cassie's emotions as an undercover agent, her relationships with her boss and her boyfriend, and the fascinating personalities she is living with, there is a great feeling of tension and suspense.

I really enjoyed reading The Likeness, and liked it more than In the Woods which I think bodes well for French's future writing. The only quibble I have is that French's books are awfully long, and I think it's a bit difficult to maintain suspense over such a long period of time/pages - the narrative could be a little tighter if that makes any sense. In any event, I would certainly recommend French's books and will be interested to see what she writes in the future. 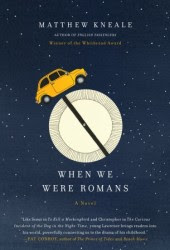 When We Were Romans by Matthew Kneale is one of the most beautifully produced books I've ever seen. Under the dust jacket, the cover is a beautiful piece of art by Ian Dingman which you can see here. Do take a look, it is gorgeous.

When We Were Romans is a tale told by Lawrence, a 9 year old boy, whose mother Hannah believes his father is trying to hurt their family. Hannah decides on a whim that because she has friends there, Rome would be a good place to escape to, and loads Lawrence and his younger sister into the car for the adventure. Lawrence tries his very best to keep the peace and be his mother's ally, yet he is just a boy, and this comes though as well. We also hear about Lawrence's fascination with astronomy and Roman emperors, whose stories in a round-about way mirror what he is going through. Everything is not as it should be though, and as things become more clear this novel takes the reader to a rather horrifying place for Lawrence and his family.

The voice of Lawrence in this book is pitch-perfect, the narrative being full of run on sentences, misspelled words and the general inner workings of a young boy trying to make sense of the adults around him. It is fascinating to consider what goes on in the mind of a child and how they interpret the world around them with their limited experience. Despite the fact that I felt this was a very well written book and appreciated what the author was doing, I did not get that deep sense of satisfaction that I get from a really good book. I think this probably had to do with the telling of the story from Lawrence's perspective, I was never fully connected with him.
Posted by Tara at 10:06 AM

I've heard lots about all three of these books. Most of all of it has been positive. I definitely want to read both of French's books, but I haven't quite decided about When we were Romans, yet. Great reviews!

Ooh you liked it even better than In the Woods? I can't wait to read it. I hope to pick it up in the next couple of weeks. I'm so curious to read this with more of the focus being on Cassie.

I really enjoyed When We Were Romans, but I understand not having that fully satisfied feeling at the end of the book. The childish writing, while very well done, keeps the reader at a distance.

Bermudaonion, so does mine!

Lisa, Thank you! I think there's been a bit of 'buzz' about all three.

Iliana, yes. Yes! I liked it better, since it was a bit less 'police procedural' and more psychological. It was interesting to find out more about Cassie's perspective in this one. I wouldn't be surprised if French uses her again as the protagonist.

Ali, exactly what I was trying to say- 'keeps the reader at a distance.'

I still plan on reading French's first book...another book jumped ahead of the line (library book!). And I'm glad tohear the next book is even better.

Danielle, The Likeness was a library book for me, which is why is jumped ahead on my own list! I'm looking forward to seeing what else the author writes.