It must be that time of year

This is my first experience with the 'end of the school year' and it's a doozy. I can hardly keep track of everyplace we need to be let alone gather my thoughts and write an intelligent review of anything. I've watched my girl in 5 'performances' since last Thursday, not including t-ball or swimming, or the kindergarten art show or girl scouts...whew. So, since I haven't shown any book stacks in some time, I thought I'd share some recent acquisitions.

Lots of these books came from bookcloseouts. I was thrilled to find Dark Hearts of Chicago there - I'd read some great reviews of this a year or so ago and wouldn't you know it hasn't been published in the US. Similar story applies to A Hidden Life. The Louise Erdrich book was bought used since I enjoyed The Master Butcher's Singing Club so much. 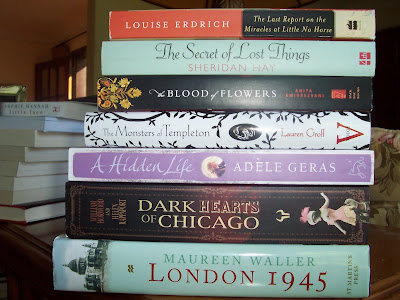 The four books on the bottom of this stack were purchased at a book sale. I went to the same sale last year and had better luck. There were a lot of 'dealers' there - they had scanners and would scan the codes on the books to see if they matched what they were looking for. I found them irritating since they would block whole sections of shelves and the space was quite cramped. I was happy to snatch The Blood Doctor right out from under someones nose before he could scan it. Ha! This pile is heavy on suspense, including another mooched Barbara Vine and the Sophie Hannah book, an author I became aware of through other book bloggers and who is not published here as far as I can tell. Can you see that Agatha Christie? It's And Then There Were None - I've yet to read her but read a great review of this recently. 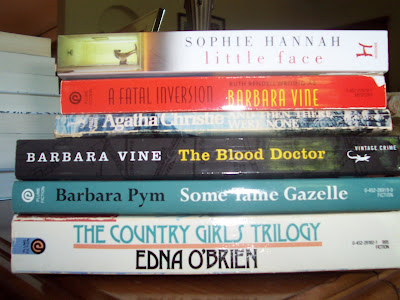 This third stack is quite a mishmash. Book Crush is Nancy Pearl's version of Book Lust for children and teens. I've found loads of great suggestions for my daughter and for friend's children as well. My daughter tends to go straight for the 'character' books (barbie, princesses, etc.) and I'm trying to steer her gently away. Karen wrote about Can Any Mother Help Me? some time ago and I've been waiting for the paperback to come out (bookdepository). The subject is fascinating - a group of women in England in the 1930's form a secret magazine which they write and pass around - and leave each other comments on! It sounds like blogging but without computers. Let's see, more nonfiction, A Fatal Waltz compliments of Harper Collins and finally a book I was excited to pick up this past weekend, The Minnesota Homegrown Cookbook. It's filled with stories of restaurants, farms, and recipes using local ingredients. So far, I'm the only owner of it on LibraryThing! I just realized I forgot to photograph another book which seems timely - The Lizard Cage by Karen Connelly - which is set in Burma. I read about it on a blog, I think, but cannot remember where. 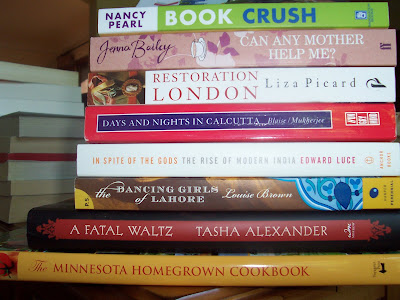 As I look over these books, I am again astounded by how many have been purchased as a direct result of book bloggers. I never would have known about many of these or thought I would have been interested them. I thank you, as always, for letting me be a part of this amazing community.

Hopefully, regular programming to return soon.
Posted by Tara at 9:26 AM

Labels: Children's books, Cookbooks, local eating, my girl, What to read, where to buy books

What a marvellous haul!
Edna O'Brien is someone whose books I used to love but haven't read in years. Dark Hearts of Chicago was a real ripping yarn. You have Adele there and her daughter Sophie - whom I've yet to read - and other great things, too. Well done!

Those are some great stacks! And boo to 'dealers': that is so annoying. I would have been tempted to 'accidently' jostle the scanner a million times, hehe.

What a wonderful haul of books! I have Blood Doctor on my tbr pile too, and have heard excellent thing about it. I also have Restoration London. And I like the sound of Can Any Mother Help Me? Might have to look that up...

These look great. I have a few of them around here myself. Hope you enjoy AND THEN THERE WERE NONE. You might want to watch one of the movie versions as well. It's one of my favorite Christie's.

I have a copy of Dark Hearts Of Chicago on the TBR that I should get to soon. Your book piles look delicious.

Wow, you've got some great books there. I really need to do some posts like this sometime, but I'm afraid to admit just how many books I'm actually purchasing. I try not to think about it. :) I can sympathize with the flurry of activity that comes with the end of a school year. It will become more busy with each passing year. I'm very sad to be doing this for the last time. My youngest son is graduating from high school on June 12, and there is so much going on right now. But, I'm savoring every bit of it because I know we're closing a chapter in our life. O.K., I'm going to stop now before I start crying at the reference desk.

Karen, I've never read Edna O'Brien but this looked quite interesting. I'm looking forward to all of these - I only wish I could read faster!

Eva, I was tempted myself, believe me!

Cath, I'm glad to hear that about Blood Doctor - this was the only Vine I found there. I think you would really enjoy Can Any Mother Help Me?

Kay, a movie version? Thanks for letting me know.

Lisa, I'm a bit embarassed myself, but I figure I'm safe among the book loveres. It feels that this kindergarten year has flown by and I'm sure the end of school will truely be here before I know it. Such a bittersweet time, to close one chapter and move on, especially this chapter from childhood on to college and independence.

Monsters of Templeton! I've meant to pick that up since seeing it on a blog.

Carrie, you know you're gratful!! The cover of Monsters of Templeton is wonderful, by the way.

Heather, they really are! They were muscling elderly people!

The Barbara Pym will be a good antidote to all that suspense. There's nothing to beat a good book stack, is there?

What great stacks!! London 1945 looks really interesting, as does Dark Hearts of Chicago--I'll have to look those two up. My next library sale is next month. you've got so many good ones there, I'm envious! I've got a Fatal Inversion on my pile to read, too--that same edition. Enjoy your books and enjoy your summer vacation!!

I bought both Can Any Mother Help Me? and London 1945 as books I Absolutely Must Read Right Away ages ago... and, of course, have read neither of them. Both went straight to the piles by my bed, though...

And Then There Were None is my favourite Agatha Christie book - her plots are so good.

Danielle, both that you mentioned sound like they're right up your alley. I got Fatal Inversion from a swap - doesn't look as though it has been read!

Simon, I have LOADS of books that go into that category.

Ugh, I hate the dealers at book sales! It seems like they are always in the way of what I just know are books I want! :)
You got some great books to enjoy. I need to look for the Book Crush book. I have Nancy's other two books and get a kick out of browsing through them every so often.

Iliana, I also like to browse through Nancy Pearl's books now and again. I just love books that are just lists of books - I have quite a few. I brought this one to the library today to pick up things for my daughter so it is coming in handy.