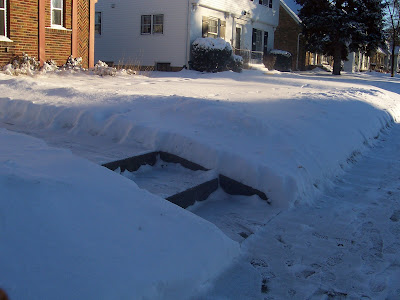 Plenty of it already - as far as I'm concerned - and more on the way. We might have a total of 20 inches by this weekend. I am so thankful for my new tires we bought last winter.

I have a habit of browsing my bookshelves as though they are a bookstore. Sometimes I do it when I'm looking for my next read, sometimes when I'm just waiting for someone to arrive. But what I always realize is, why haven't I read all these amazing looking books? I bought them, and now they're just sitting here. So I've decided to make a list. A list of books that I will make some sort of attempt to get to in 2008, and I hope that having this list will prompt me to go back and look at it. The books on this list are on it for a reason. Some have been on my shelves for years, some are newer but I made a big fuss about obtaining them. Some were obtained when I was on a kick about something that has now passed. In any case, all deserve a chance to be read and I hope to give it to them. I've chosen 24 books, 12 fiction and 12 nonfiction. Interestingly I had a much easier time choosing the nonfiction list. And for the record, this is not a challenge, just A List. 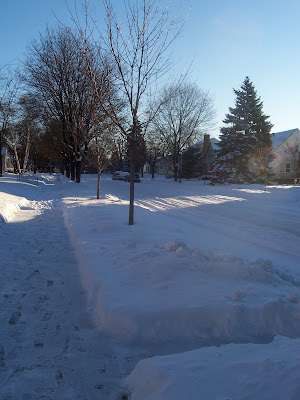 Labels: Goals, What to read, Where I keep my books

Is that your street, Tara? I so love seeing where people live. Do you know the movie Grumpy Old Men (which I am watching again very soon)? The street looks a bit like this. And it was filmed in Minnesota:
http://www.imdb.com/title/
tt0107050/locations

I've done something quite like your list, only I've done it with challenges. I've joined four, and almost all the books I've chosen are from my very own books. I'm quite excited, but I do wonder if I will ever cook or blog or talk to anyone. It feels like I will be just reading. Not such a bad thing. :<)

"I have a habit of browsing my bookshelves as though they are a bookstore"...me too. And I love that. I always wanted to have enough books to do that with and I've gathered enough books now that I have about 100-150 just for me to 'shop' through. Doesn't stop me from buying more, but it is making me think about being more frugal in 2008 and actually reading what I have.

Those photos make me shiver. Brrr. It was sunny where I am and quite warm for this time of year. Very pleasant. :-) I'm afraid I'm not much of a cold weather person.

I've been considering what books I want to read next year, but I keep changing my mind. Maybe I can fit them all in, but it isn't very likely is it? Oh well. It looks like you will have some good reading ahead of you!

What's going on? I'm not getting notifications about comments on this post - though I am on other posts. Hmmm.

Nan, yes! This is my street! I also love seeing where people live. I did see Grumpy Old Men but it was years ago..I should watch it again now that I live here. Your plan sounds good to me 'just reading' - ahhh.

Hi Carl V, thanks for saying hello! Glad to hear you know where I'm coming from - I try to stay frugal too, but like you, more keep coming in.

Literary Feline - I'm not much of a cold weather person either! But somehow I was talked into moving to the tundra. I was in Chicago before this which is similar....but not as bad. I figure it will be fun to look back at the end of 2008 and see what I've accomplished.

Hi Tara,
I had the same thing at my blog today, where I wasn't getting notifications about comments.
In 2008, I want to get all those biographies read, catch up on my outmoded authors and read more graphic novels. And more, of course.

I loved Fast Food Nation - but I think you know that already ;-) I want to see the movie of it now.

The reast of your non-fiction list sounds ver intriguing - I have scribbled more than a few down to investigate. I have Maximum City to read as well - maybe we can take the plunge (it's long!) together some time next year?

My goodness, you do have snow don't you? LOL. Here it's wet and windy and miserable so your snow looks very nice to me. I'm sure it's not that great to be out and about in though.

I read the Molly Hughes book years ago and loved it to bits. I think you will too. I'm trying to make a list of books I want to read in 2008, like yours, without being too restrictive as I'm such a creature of moods when it comes to choosing books to read. Perhaps I'll do a post about it when I'm ready.

What to read next year? Oh, too many to list here! Jane Austen definitely. The newest Joanne Harris, and that Sarah Bower book, too, unless I get to it sooner. I like looking at my shelves, too. It reminds me of all the great books I already own and that I don't need to buy anymore new ones (hahaha). By the way, it seems you've sent the snow you got yesterday down south as we are getting it today (actually I think it is due to a new storm). It is snowing as I type even. Pretty, but....I only want a white Christmas and then it can go away again! :)

Bybee, I'm glad I said something and I'm not the only one. Now it seems some comments are coming through, but not all. Grrr. Your list sounds great! Mine also contains the "more, of course"!

Nutmeg, yes Maximum City is long and I'd love to have someone to read it with! I think the length is what keeps stopping me from starting reading it. I look forward to your list.

Cath, it's not that fun if you have to drive. I have the Molly Hughes book as part of a boxed set of 3 - there is another about 1880s and one about 1890s. I'd love to see your list - I don't like to feel restrictive either...them it seems like work.

Danielle, I look forward to your thoughts on JA! You are welcome for the snow ! (wink, wink!) I hope this won't be one of those years when we won't see the ground again until April...

I haven't thought about any personal reading goals for next year yet but I'd really like to read something by Elizabeth Taylor. I thought I was going to do that this year but somehow didn't get to one of her books. Right now I'm trying to decide which challenges to join :)

I have Consuming Passions sitting on my shelf to read, so I will be keen to hear what you think of it.

I am currently reading an Anne De Courcy - Debs at War - I am really enjoying it. I hope you find Diane Moseley just as good.

Good luck with your challenges...I am challenge free but I really enjoy reading everyone's lists.

Possum magic, did you read Judith Flander's book about Victorian Domestic life? I loved it. I've heard of Debs at War and it sounds good - in fact many of De Courcy's books sound good to me but very few are published here. I hope more show up on bookcloseouts.

Hopefully I will be getting to some of the challenge books I've foolishly signed up for! Love the snow pics - I miss snow sometimes. We're in the high 70s here today ...

This is such a great idea! I am guilty too of owning lots of wonderful sounding books that I have not yet read. And I also browse my own shelves looking for the next thing to strike my fancy. I just might have to make up my own list for 2008 as well!

Elaine, I should have known you would put your vote in for that one! ;-)