I Won! And I read some books, too.

I won a prize from the Non-Fiction Five Challenge! It is a flipklip which holds your book open so you don't need to use your hands. I was not the first to use it. 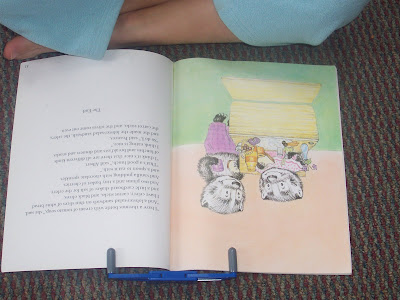 My little one said it was too hard to hold the book while she listened to her Frances CD. Thanks so much to Joy for the flipklip and for hosting this challenge.

I have finished two books in the past few days. The first is The Accomplice by Kathryn Heyman. This book is a fictional account of the wreck of the Batavia, a Dutch ship, off the coast of Australia in 1629. The story is told from the point of view of Judith Bastiaansz, daughter of the minister on the ship. The first half of the novel details how Judith and her family come to set sail on the Batavia and daily life on the ship. At this point in the novel, I was feeling a bit confused about some of the characters and their motivations so I did some research about the true story of this shipwreck. This was helpful in understanding the story better, but did take away a bit from the suspense of what the inside flap describes as 'one of the most shocking events of the seventeenth century'. Heyman describes what life was like at sea for months at a time; I particularly liked how Judith's mother was written, you could sense her misgivings about the trip and increasing depression as it went on. The story of what was so shocking can be found here. This part of the book was very difficult to read and quite horrific. Overall, I am glad I read this book as I had no prior knowledge of these events.

The second book I finished was Plan B by Emily Barr. This was an entertaining book and a good choice for me to read in between working all weekend. I enjoy Barr's writing and the bit of suspense she includes in each of her books.

In other news, I was browsing the library's list of what they have on order and realized Lisa See has a new book coming out. I loved her last novel, Snow Flower and the Secret Fan. My girlfriend that I recommended it to described it as 'everything I was looking for in a book'. High praise indeed.
Posted by Tara at 3:02 PM

How cool is that!?! Thanks for sharing the picture. :)

I know. The temptation to squeal with delight is just too great...

Hey, that's pretty cool - congrats! I bet it would be useful for cookbooks.

Cool, congratulations! I have Snow Flower in my que to be read.

Congrats! That flipklip looks so cool.

I really have enjoyed a couple of Emily Barr's books too. I have to look for Plan B... hadn't heard of that one.

Jill, it is, isn't it. I just couldn't believe it when I got the news.

Lesley, yes I agree, I am going to try that.

Myutopia, I hope you enjoy Snow Flower. I just loved it.

Bookgirl, Plan B has not been released in the US, I received it from a mooch. Maybe bookcloseouts... =) I think my favorites of hers are Backpack and Baggage.

I was sorry to miss your previous post - life got in the way there for a while!

I liked your book stacks and I've duly noted down your Holocaust recommendations - half the fun will be reading about all these books I've not seen before!

And The Great Stink was really quite a good Victorian novel - I enjoyed all the history and the mystery part of it was a great bonus! I have read the back cover of her latest and the subject matter, if I remember correctly, sounded interesting.

Hi Nutmeg, I'm glad the holocaust recommendations were useful to you as well. Your wonderful review of The Great Stink was what made me take a second look at this book and seek it out. I meant to mention that in my post but it seems I forgot!

Oh, Frances! I loved those books so, so much as did my husband, and of course the kids. When you eat your lunch, do you try to make it come out even? :<)

Nan, I too loved them so much! I had the books with companion 45s and I can still hear in my mind that woman reading the story and singing those little songs. My Mom still has the records, but they don't seem to work.

I do try to make lunch come out even! It doesn't always work, though. =)