Our peonies are blooming! 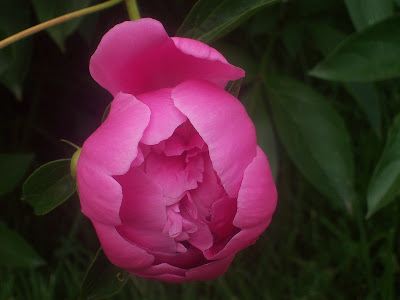 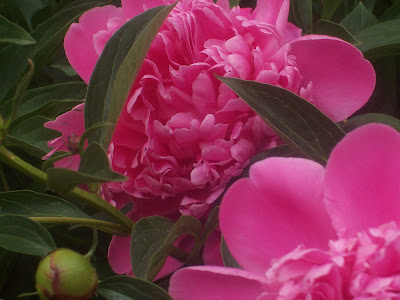 I have had a very busy few days here. I am not really the sort of person who likes to go from one thing to the next without any sort of break, I think it's the introvert in me that likes to have unplanned hours of time in the day. In any case, I've had so much going on that I had things scheduled (work included) from Thursday evening all the way to Sunday at midnight. In addition to all that, I really just started feeling better yesterday from that nasty virus I had. So, I am starting the week fresh, and very glad that the past few days are over.

I was reading the Book of the Month club catalog that came in the mail last week and came across a book that sounded interesting to me, Custodian of Paradise by Wayne Johnston. I was looking at the photograph of this novel and thinking, 'Goodness that looks so familiar!'

So, I went upstairs to find this book, The Accomplice by Kathryn Heyman which I recently received from bookcloseouts.

The photographs are exactly the same, only the coloring is different. Well. I am really feeling for Wayne Johnston. Does he know another book has the same cover as his newly published one, which I am sure he has worked very long and hard on? I doubt it. To be fair, I am pretty certain The Accomplice has not been published in the US, my copy is published in the UK, however fairly recently - 2003. But what cover will be used to sell Johnston's book in other countries? I am now really curious about the process of choosing a book cover. I find it hard to believe that whoever decided on this cover for Johnston's book knew it was just used in 2003 for another title.

I had found another example of this recently and have even written about it here - I was not however savvy enough to illustrate my point. 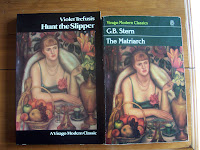 I received The Matriarch from a book swap and when it arrived in the mail, again it looked so familiar. I looked through all my Virago's and found that Hunt the Slipper has the same cover. I'm not sure why these 2 covers bother me less than the ones above - perhaps because these Virago editions are reprints and not first editions? In any case, they were both published in the US, in 1984 and 1987 and I find it hard to imagine that Virago did not realize this. Perhaps they just hoped no one would notice.

In other 'news', I was reminding my husband to tape a program for me on television while I was at work, when I noticed in the newspaper The Secret Life of Mrs Beeton would be shown on Masterpiece Theater last night. Fortunately, I think he was able to make a copy of it. Unfortunately, I don't know how to operate the television he used, so I will have to wait for his assistance. In my defense, it is a rather new set and there are 4 remotes involved.
Posted by Tara at 1:28 PM

I would be curious to know about the selection of book covers also. Hmm. I've never ran into that before, or at least not that I'm aware of.

The peonies are gorgeous, by the way!

If your peonies were on the cover of a book, who could fail to pick it up?!

I missed Mrs Beeton too, but I didn't even tape it. :<( Let me know how it is because Netflix will probably offer it at some point.

What a fascinating thing about the book covers.

And what a nice comment from Karen; I love that.

Your peonies are so beautiful. I wish I had taken some of the peony in my back garden. The flowers have all dropped now, but this was its best year.

Good title for your blog,I love books and also cooking.

I avidly read your review of Dusty Answers - I am looking forward to picking it up eventually.

I don't think I've noticed if a book has the same picture but what I do notice is when they have "trends" in cover art. Like the ones started by Captain Corelli's Mandolin and David Mitchell's Cloud Atlas. I think publishers jump on the bandwagon by having newish authors have covers by the same designer as the more established writers - thereby trying to attract the older writer's audience to the new. All very interesting. But it would be interesting to know what these authors here think of having the exact same picture used on their books!

My copy of Mariana arrived yesterday :-)

Karen, what a kind thing to say - thank you so much.

Nan, I'll let you know how Mrs Beeton is. I haven't gotten around to watching it yet.

Booksplease, thanks so much for visiting. Most of the peony blooms are open now and like yours are looking well this year. We've had some sad years when they've bloomed and then a big storm came along and torn all the petals off.

Nutmeg, Do read it; I'd like to hear another 'modern' view of Dusty Answer.

Very interesting observation you've made about cover art. I'm pretty sure in the past I've picked up a 'familiar' looking book only to find it is a new author. I too wonder what these authors would think! (Do I dare say something 'louder'??)

I'm happy to hear Mariana has arrived, it is also on my shelf and looks wonderful.

It is weird when books end up with the same photo on the cover. I think in some cases the photos are just stock photos that anyone can use (or purchase). I have come across this before as well. As for the Viragos--at first I thought it was the same title--the black Viragos were published by Dial in the US and the green ones in the UK, but in this case the books are different. I guess they must have liked the artwork!

Danielle, I think this cover may be a case of a 'stock photo', I looked at the book in B&N and the photo credit was Getty Images.

I've loved Wayne Johnston's other books and have had this one on my wishlist for awhile (I'm from Newfoundland and he sets at least part of his novels in that province). I'll be curious to see what you think of it if you end up reading it.

Speaking of identical book cover images, I was in a bookstore the other day and saw a book that had the exact same image of the hands holding the apple that's on the cover of Twilight. I can't remember the title but it was something religious-themed, which I thought odd, considering Twilight's subject matter. :)

Lesley, I suspect I will read Johnston's book at some point; the description just sounds so interesting. Maybe I will wait for the paperback to see if there is a different cover =) How interesting about the cover images you've recently seen!